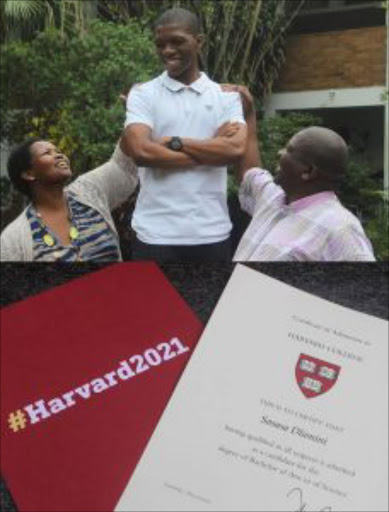 A South African teenager from Umlazi in KwaZulu-Natal is headed to Havard University.

Sasasa Dlamini has been accepted to study at one of the top universities in the United States and will be starting his Politics Philosophy and Economics studies in August.

Dlamini, who achieved straight As in his matric at Westville Boys' High School is one of the 6% of about 40 000 applicants who have been accepted to study at Havard.

"It's not [going to Havard] something I've always wanted because I just believe that whatever university you go to is what you make of it but I am very excited to have the ability to access the resources and the people. I believe Havard will offer me the best opportunities," said Dlamini.

The fascinating story about Dlamini going to Havard is that he did it all without any help from his parents.

He did not tell his parents that he was applying and even wrote two essays and an admission test without asking for help. His reason, he didn't want to share the disappointment with them.

South Africa is currently sitting at an unemployment rate of 26.6% with many people living below the prescribed living standards. Dlamini wants to change that.

The 17 year-old former debate team member and mathematics olympiad wants to be the change he wants to see in South Africa.

"I wanted to study this specifically because I think that we should be creating more jobs and just making sure that more people have a better standard of living in South Africa and I just wanted to be part of that change, which is why I'm studying Econ and Politics."

"So I want to be part of that job creation and obviously alleviating poverty is my biggest goal," he said.

Dlamini does not have to worry about his tuition costs. He says that the financial aid package is "very generous" and will take good care of him between August 2017 and 2021 when he completes his studies.

His father, Nicholas Dlamini, says that he has emulated his name which loosely suggests someone who brings excitement and joy to his or her family.

"That sums up how the family is feeling. We are so proud of him. We are overjoyed and speechless. He has taken us by surprise. We knew he going to do well in matric but not this," he said.