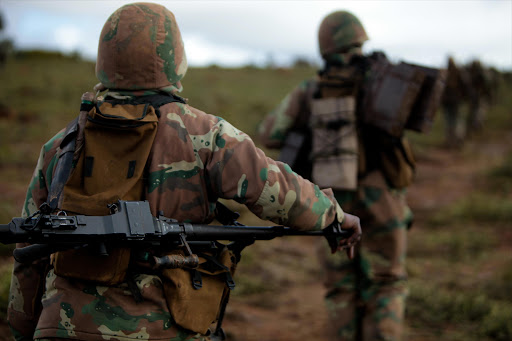 Soldiers on border patrol have seized dagga worth at least R31 million this year‚ the South African National Defence Force said on Tuesday.

Other seizures by the 15 companies of troops deployed on the border included:

- 60 weapons‚ mostly hunting rifles and handguns but including an AK-47; and

“Among the thousands of people stopped by soldiers during regular patrols‚ 15 467 were found to be (undocumented)‚” said SANDF spokesman Lieutenant-Colonel Piet Paxton.

“They were all handed over to South African Police Service Police and Department of Home Affairs officials for further processing.”

Most clothing and footwear was confiscated from people entering from Mozambique‚ while the Zimbabwe border was the main entry point for illegal cigarettes. Both countries were also the source of almost all the undocumented people trying to enter South Africa.

“The Free State/Lesotho and Eastern Cape/Lesotho borders were where the majority of livestock rustlers were apprehended and these borders are also the chosen entry point of dagga smugglers‚” said Paxton.