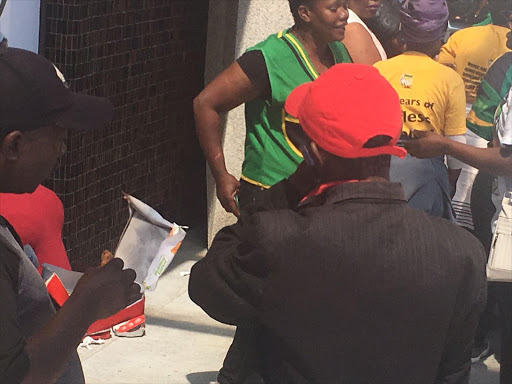 While the Democratic Alliance motion of no confidence debate against president Jacob Zuma saw barbs exchanged inside parliament‚ his supporters scrambled to get their hands on KFC takeaways and bright yellow ANC t-shirts bearing his image outside the National Assembly.

When the garments‚ also carrying the slogan “Defence of Democracy’’‚ were dished out to a group of supporters who had marched to parliament‚ near chaos erupted.

People almost came to blows while trying to get their hands on the t-shirts and boxes of Streetwise fried chicken being KFC handed out by people wearing party regalia.

ANC branch member Luyanda Ndayimane‚ from Crossroads‚ said the marchers supported Zuma but “understood” why the DA had brought the motion of no confidence.

“The president has been involved in many scandals across the country. The DA has a point when it comes to saying the president must step down. But we are here today to support the president so that he can at least finish his term‚” he said.

Several school children from Mfuleni joined the group. They said they were mobilised by COSAS members at their schools and they had travelled to Cape Town by train.

They said they wanted to voice concern about poor infrastructure at their schools and planned to march to the offices of Western Cape Premier Helen Zille. The pupils formed a long queue as KFC meals were handed out by people wearing “Hands off Zuma” t-shirts.

Bystander‚ James Dube‚ was “confused” by the protest.

He said he saw a bus unloading school children and he was concerned about their safety.

More shirts were later handed out causing further scuffles and some women were seen wearing three layers of the shirts.