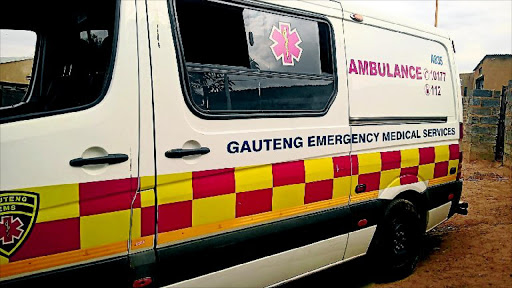 JOY RIDE: The ambulance that a mentally ill patient allegedly drove off in while the paramedics who were sent to take him to hospital went to talk to his uncle who had called them. The two paramedics who went to pick up the mentally ill man allegedly lied when they said they had been hijacked by two gun-wielding men in Tembisa PHOTOS: Supplied

A matric pupil who survived a horrific accident that claimed the lives of her three friends has told of the events leading up to the tragedy.

The 17-year-old pupil at Nkomazi High School said on Thursday morning she prepared herself for the matric dance.

She said taxis hired by the school to ferry them to the matric dance venue at Buffalo Hotel in Hectorspruit, outside Tonga, left at 2pm. They arrived at 4pm.

"We changed into swimming costumes and others went for a swim. My friends and I took pictures. We then went back to our rooms to get ready for the event which was to start at 5pm.

"We put on our dresses and make-up," she said yesterday from her sick bed at Tonga Hospital.

She said at about 11pm, the hotel was closed and the pupils boarded the taxis to ferry them back home.

"There was a plan among us pupils to go to a bar in KaMhlushwa for the after-party.

"The taxi left us at the garage in Tonga. My friends who were in another taxi came to fetch us from there."

She said they were picked up by a Toyota Verso and went to the bar.

She said at the bar, she and some of her friends drank dry lemon - a nonalcoholic drink - while others took alcoholic beverages.

"We danced and enjoyed ourselves," she said.

She said the bar closed at about 1am.

"We left in a convoy of four cars. They were speeding. I saw the car I was in swerve off the road and hit a barrier.

"I fainted and only regained consciousness later. I did not see the car roll. My friend Naledi told me that it had rolled several times," she said.

The department of community safety said the car overturned in Tonga View on the D797 Road between Mzinti and Tonga.

It was airborne for several seconds before it landed on a house that is still under construction.

The student suffered injuries to her face and has a horrible scar on her nose.

Her neck was sprained and she still wears a neck brace.

"I have lost my friends. It hurts but I am grateful that I survived. I am hoping that I will be discharged next week so that I can go and study and get ready for my exams.

"There will be a revision camp at school and we will be staying there from October 14 until we write our agriculture paper," she said.

She said her mother had not authorised her to go to the after-party, and she apologised to her.

"I am sorry I went there. If there is anything I can change about that night, my friends and I would go straight home from the event venue," she said.

The mother accepted her apology, saying: "I am able to sleep now. I was worried on the night of the accident because it was her first time out at night."

'We didn't know he went to party'

Another student's parents did not know that he had gone to a matric dance on the day he died in a horrific accident in Mpumalanga.

In fact he was supposed to attend his own school's ball on the fateful day. He was among four matriculants who died when the car they were travelling in overturned on the D797 Road between Mzinti and Tonga in the early hours of last Friday.

Five others were injured. His shattered family said they wanted answers.

"As far as we know, he was at a friend's house studying. His friend's parents told us that they studied most of the day and at night took a bath to refresh.

"They did not realise that they had gone out of the house. None of us believe that he is gone. We are trying to be strong," said his father.

He said his son, who was among eight other passengers in the seven-seater vehicle, had suffered spinal injuries and had internal bleeding.

"I identified him in hospital. I am trying to be strong. We all are, but it is hard," he said.

Thandiwe Zitha from Mangweni village also did not survive the accident. Her uncle Jeffrey Zitha said his niece was pierced by a car part in the head during the accident.

"The first people at the scene said she complained that she was hurt in the head. A neighbour removed the metal object and held her in his arms.

"She was still alive when she arrived in hospital. They could not do anything to save her. It was a horrible sight," said Zitha.