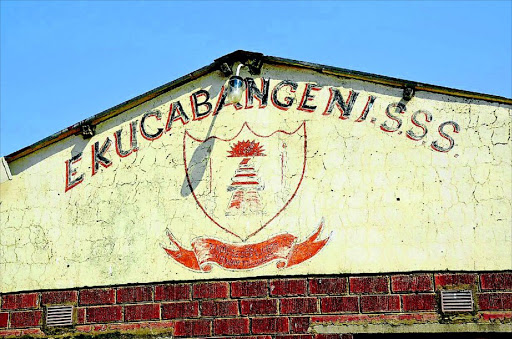 Ekucabangeni Secondary, which was visited by MEC Mthandeni Dlungwana yesterday.

The KwaZulu-Natal Department of Education on Thursday sought to rebuff “media reports…that the accused in the sexual video case denies that the people he is seen with in the video are learners”.

An explicit clip allegedly showing a man having sex with a pupil‚ while another was present‚ in a cottage at Ekucabangeni High School in Nquthu went viral on social media. In reaction pupils went on a rampage‚ torching the building just over a week ago.

Provincial education MEC Mthandeni Dlungwane said: “We do not want to argue this matter in public‚ since it is sub judice‚ however we want to confirm that we have it on good record that pupils seen in that infamous video are indeed our learners.”

TMG Digital reported earlier this week that the teacher caught in the scandal is on the Gauteng education department’s watch list.

According to Gauteng MEC for education Panyaza Lesufi‚ the man has gone to ground.

“We are worried that he cannot be traced and as the department will do everything in our power to help the police in their search‚” he said.

“Because he can’t be traced we feel that he might try to run to Gauteng. We have now asked the police to assist us.

“We don’t want to find him guilty before he is charged but if he comes to Gauteng‚ all our recruitment agencies have been activated.

“There is a culture of this teacher to move from one school to another school when there is a possibility of suspension.

“We want to sympathise with our colleagues in KZN. We believe this is the kind of teacher that we need to flush out of our education system.

“We are urging this teacher to go back to KZN to face the music. If there is nothing wrong that he has done‚ he must go there‚” Lesufi said.

Lesufi was on Monday addressing the media on various issues the department has dealt with in recent months.

Also on Monday‚ Parliament’s portfolio committee on basic education’s chairperson Nomalungelo Gina said that it was “unacceptable” for a teacher to have sex with pupils.

“This is unacceptable. Teachers are in a position of trust and power. They should not be abusing this power by engaging in sexual acts with learners who are vulnerable.” – TMG Digital