"I thought I was going to drown": Durban mom saved by teen hero 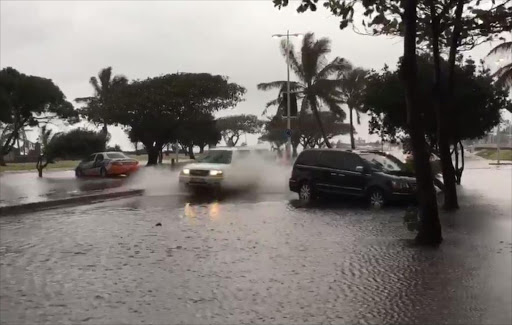 She was reunited with her rescuer‚ Cameron White‚ in an interview on the East Coast Radio breakfast show on Wednesday.

“You came there as this guardian angel and took me out of that water‚ not even knowing me. I’ll be forever indebted to you‚ in fact you have now gained a new family‚” she said.

Singh was driving to fetch her daughter during a heavy downpour on Monday evening. She said the rain was “belting down… I could barely see a metre in front of me“.

As she took the La Lucia turn-off she noticed water that looked safe to negotiate. When she realised the water was too deep‚ she tried to reverse.

“My car stalled and the next minute this absolute torrent of water came down the banks… and my car became buoyant in a matter of seconds‚” she said.

“My car became a boat‚ I had no control of it.” The floating vehicle quickly started filling with water‚ making it impossible for her to open the driver’s door to escape.

“I felt somebody by my car on the passenger side… and there he is at the window and he said‚ ‘I’m going to get you’.

White told listeners that he was shocked to see a person in the car and‚ worried it would take too long for police to arrive‚ stripped down to his shorts and “decided to just jump in myself“.

“I was just worried that the car was going to take in too much water. I couldn’t imagine myself being in that position. I’m just happy that she’s OK. I’m sure it left her with a good feeling but it left me with a good feeling as well‚ just being able to know that I saved someone‚” said the humble teenager from Umhlanga.

His intervention came in the nick of time. Singh’s vehicle was completely submerged shortly after she was pulled to safety.

East Coast Radio posted photographs of the drama and Cameron on their Facebook page.