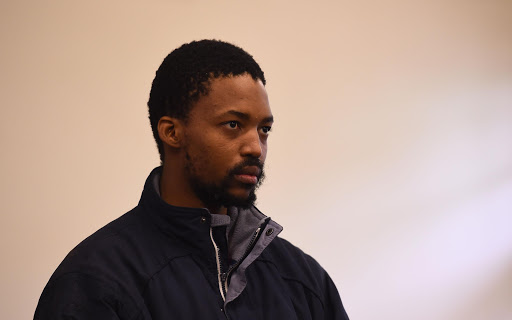 He looked like someone who had not had much sleep.

Zinde, 28, who is accused of killing his mother Hope Zinde, a former SABC journalist and board member, will undergo mental observation this week.

He made his first appearance at the Brits Magistrate's Court in North West yesterday. He walked straight to the dock without looking up.

He continued gazing downwards, looking only at the interpreter and magistrate when they spoke to him.

Tall and skinny, his hair was uncombed, but this seems to be his trademark hairstyle.

In a happy picture his mother had posted last year, Zinde's hair was also uncombed.

He is charged with one count of murder and another for possession of drugs.

Magistrate Moses Maswanganyi postponed the case to Friday on the suggestion of the prosecutor and Zinde's lawyer Mogorosi Daniel Molusi.

The prosecutor told the court Molusi "requested transfer of the matter to the regional court for an inquiry to be made on the mental capacity of the accused".

Maswanganyi agreed to this, and told Zinde: "Your matter is transferred to the regional court, you will appear in that court on the 17th of June.

"You will be remanded in custody ... You understand?", to which the weary-looking Zinde answered "yes".

This was the only word he uttered at the brief appearance, besides telling the interpreter when the proceedings began that he understood English.

Zinde left the dock in this lethargic state without speaking to Molusi .

The court was packed with journalists, but no family members were seen in the courtroom.

Molusi is expected to make a formal bail application on his client's behalf on Friday.

Hope's death shocked the country at the weekend.

Her body was reportedly found in the boot of her car at Pecanwood, an upmarket housing estate in Hartbeespoort.

A family friend was apparently worried when he failed to reach Hope, 50, on her phone since Wednesday.

He is reported to have alerted the estate's security and police when Zinde refused to allow him into the house.

Police subsequently found Zinde's body in the boot of her car and arrested the son.

They confirmed at the weekend that they found him in possession of illegal substances.

Hope was working for the Passenger Rail Agency of South Africa at the time of her death.