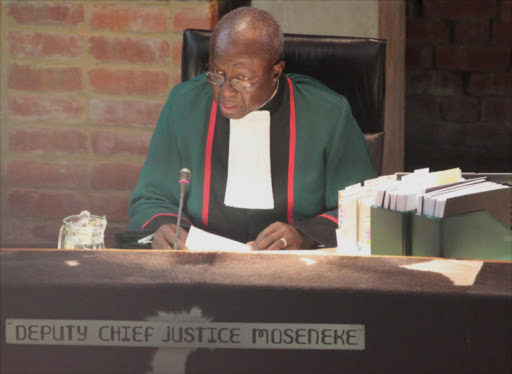 The Economic Freedom Fighters (EFF) would like to see Deputy Chief Justice Dikgang Moseneke entering the political arena following his retirement from the legal profession.

Saying his “fierce independence was a credit to the bench”‚ the EFF on Thursday said it saluted Moseneke on “his imminent retirement from an illustrious career in the legal profession and service to his country and his people”.

Moseneke steps down on Friday‚ which will be marked with a ceremonial session to mark at the Constitutional Court.

“His wisdom and wise counsel should not be lost to the emergent leadership of progressive forces across the political spectrum‚ in and outside the country‚” said the EFF’s Mbuyiseni Ndlozi.

“Our message to Comrade Moseneke is that the struggle for land and economic freedom has just been reignited‚ we therefore pray and hope that he will find the space to re-enter the political arena in whatever manner is appropriate.”

Ndlozi said Moseneke had “served with distinction” on the Constitutional Court‚ was “most aptly demonstrated by the childish pettiness visited upon him by the small minded and intellectually bankrupt Jacob Zuma regime when he made the accurate remark that adjudication should not be driven by party political considerations”.

“He was then castigated by the ruling party and unfairly penalised by Jacob Zuma who actively and vindictively deprived him of his well deserved elevation to the position of Chief Justice.

“In spite of that snub‚ Justice Moseneke took this insult with dignity and continued to serve his people with aplomb.”

In an interview with eNCA in Thursday‚ when asked whether being overlooked for the position of Chief Justice hurt him‚ Moseneke said he had served under three chief justices and had been overlooked three times.

He said if someone had asked him if he wanted to become chief justice‚ he would have said yes‚ but added that “it is neither here nor there”.