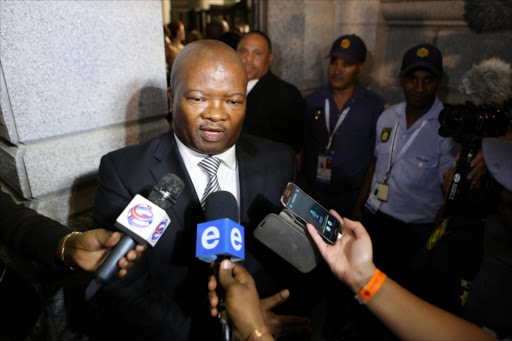 Corruption, which has led to South Africa's credit rating being slashed, is so deep rooted that it has filtered down to the pensions of state workers, alleges UDM leader Bantu Holomisa in a complaint lodged with Public Protector Thuli Madonsela.

Holomisa wants Madonsela to probe if the Public Investment Corporation (PIC), that manages an estimated R1.5trn on behalf of the Government Employees Pension Fund, may have channelled over R40m to the ANC.

The Public Protector's office told Fin24 the allegations made by Holomisa is so exceptional that Madonsela will be personally involved in assessing whether her office will go ahead and investigate the allegations.

"[The complaint] was registered by the assessment centre, which is the first part of the process at the Public Protector's office. They received it, they registered it with a number and then what happens after that generally is that an assessment team will go through it and advise on the way forward, but given that this is a special attention matter regarding political parties and the like, it was sent directly to the public protector", said Belinda Moses, acting manager for executive support in the public protector's office.

Together with Madonsela's team, the complaint will be assessed likely on Friday and a decision taken to investigate the matter or not.

In the letter to the public protector, seen by Fin24, Holomisa wrote: "It looks like the institutionalised corruption, which has resulted to South Africa being downgraded by various global grading bodies, has extended its vicious arm to the pensions of government employees, Judges, Members of Parliament and others who are paid from the public purse."

He went on to list three alleged transactions, which could be the start of a major scandal:

- R40m was transferred from the PIC account in December last year to Deutsche Bank allegedly meant to fund the salaries of ANC staff members and its 104th anniversary celebrations which were held in Rustenburg earlier this month.

- A second allegation is that R2m was transferred in January this year from the PIC account to the Harith Company (a company in which the PIC is a shareholder) for the benefit of the ruling party.

- A third allegation is that the PIC was set to give R1.5bn to investment company Sakhumnotho and Kilimanjaro Capital to buy a 25% stake in Total.

"Given the specific allegations above, it is clear that there is a need for a thorough and comprehensive investigation of how the PIC is managing all the monies entrusted with them. A judicial commission of enquiry may be relevant in order to ensure that these monies are not vulnerable to the whims of the political elite," he stated in the letter.

Holomisa told Fin24 the information was anonymously conveyed to him. "It included the names of the bodies to which the monies were channelled to."

He suggested that a National Pension Fund Forum be constituted mainly by representatives of the contributors to the fund established to monitor what PIC does with the monies of public servants.

"It shall work with the legal authority over the fund (PIC Board of Directors) as well as the Auditor General SA who shall conduct regular and random audits of the PIC."

"It is certainly true that the ANC is not exactly slush with cash and must be feeling the pinch with Cosatu — especially minus Numsa — not contributing anywhere near what they used to," said labour analyst and Fin24 columnist Terry Bell.

Holomisa, who is investigating a number of allegations related to the PIC, has a good track record for ferreting out and making a noise about corruption and malpractice, said Bell, adding that all may be revealed if the forensic audit of the PIC that he has called for is instituted.

Governance specialist Judith February, who is also the co-ordinator for My Vote Counts that campaigns to improve the accountability, transparency and inclusiveness of elections and politics in South Africa, told Fin24 that it is very important that the Mandonsela's investigation gets to the heart of the issue.

There needs to be more transparency with regards to the ways political parties are funded, she said.

"We all know that the ANC is cash strapped, charge February." If there is no transparency on how parties raise money then it leaves all kinds of shady and dodgy deals from happening. We just need to be sure whether public money is being used or not and we need to be vigilant.

"What Holomisa seems to be saying is no matter what the intermediary vehicles were, public money were syphoned off to go to the ANC, which it was not supposed to. So the question here is whether that did happen, which is clearly a serious allegation."

February said hopefully the public protector will be able to investigate this as soon as possible.

The PIC and the ANC have rejected the allegations; however they indicated that they would comply with the office of the public protector during any investigations.

Deutsche Bank told Fin24 that the allegations are without foundation.

“Deutsche Bank has investigated the allegations and has found nothing to support them,” said head of SA corporate broking Samantha Forbes. Harith General Partners also offered its cooperation with the Public Protector, however it strongly denied receiving R2m from the PIC and distributing that money to the ANC.

"Harith General Partners would like to reiterate that the alleged R2m payment purported to have been paid from the PIC for the ANC’s benefit in January is patently false and devoid of truth. We are prepared to take stringent legal action to defend our reputation.

"In particular, our legal representatives have requested Mr Holomisa and the Business Day to retract the unlawful, incorrect and defamatory allegations and provide Harith General Partners with an undertaking not to publish any further utterances or allegations concerning us," it said.