Bozwana knew his time was up, mourners told 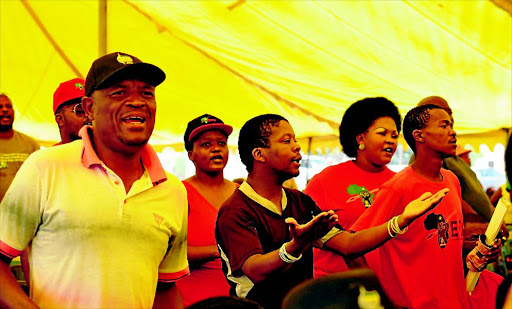 Speaking at Bozwana's memorial serviceat Montshioa Stadium in Mahikeng, North West, yesterday, his younger brother Mlungiseleli Bozwana said he told his family that there were people who wanted to kill him.

"He told us before he died that people wanted to kill him, we are sad because now he is dead. They did not kill Jesus, [so] we put our hope and faith in the Lord," he said.

Bozwana died in a hail of bullets on the Garsfontein Road exit from the N1 highway in Pretoria last Friday.

He was driving with his colleague Mpho Baloyi, who survived the attack.

He was the deputy chairman of the North West Business Forum, which organised yesterday's memorial service. The forum has since offered a R2-million reward for information on Bozwana's murder.

Bozwana was yesterday described as a fearless go-getter, a man of integrity and a man who always spoke his mind.

Bozwana's friend Themba Gwabeni said his life should be celebrated.

"He was fearless and he fought corruption in the North West, politicians must be held accountable. It's ironic that he was shot a few days after the Constitutional Court case between his company Tsoga and [the] provincial administration sits," he said.

Gwabeni also lashed out at statements issued by the province and the ANC denying premier Supra Mahumapelo's link to the murder.

"It was my opinion not an insinuation, they cannot tell us how to mourn. They think that we have outsourced our thinking, they are nothing but servants, they are not doing us a favour, we pay their salary."

"He was our hero, he once paid bail for 12 of our members who were arrested during our strike against the government buses, he was a real man," Bojang said.

He will be buried in Pretoria tomorrow.