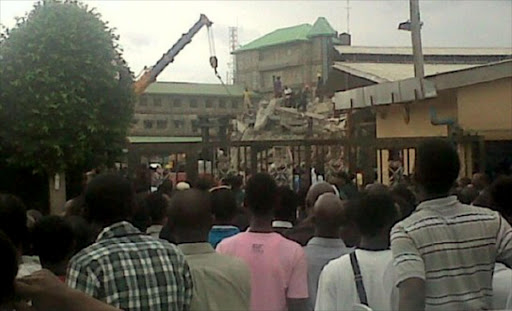 A Nigerian coroner on Wednesday said a megachurch run by one of Africa’s best known preachers, TB Joshua, should be prosecuted over a building collapse last year which killed 115 people, most of them South Africans.

The coroner, Oyetade Komolafe, blamed poor construction work for the collapse of a Lagos church guesthouse on Sept. 12, 2014 and said weak foundations led to the disaster.

“Synagogue Church of All Nations should be investigated and prosecuted by the relevant authorities over the (construction) job for not processing the necessary building permit,” Komolafe said in his ruling.

Officials at Joshua’s church could not immediately be reached for comment on the coroner’s finding.

South Africa earlier accused Nigeria of not doing enough to investigate the disaster and said Nigerian authorities did not react quickly enough to rescue those trapped under the rubble.

Joshua’s evangelical Christian megachurch has drawn tens of thousands of followers from across Africa over the last few years amid claims that he has the ability to cure normally incurable ailments.

The regular influx of visitors from abroad for TB Joshua’s services, which can run for up to a week, creates demand for accommodation.

“The church was culpable because of criminal negligence resulting in the death of the victims.” The coroner’s inquest was called to determine the circumstances of the collapse of the guesthouse for foreign followers of Joshua’s Synagogue Church of All Nations (SCOAN) on September 12 last year.

Eighty-one of the dead were South African visitors to the Lagos church run by the self-styled faith healer, who is known to his followers as “The Prophet” and “The Man of God“.

He claimed in the immediate aftermath that aerial sabotage from a mysterious “hovering” aircraft seen over the guesthouse or an explosion may have caused the collapse.

But a string of expert witnesses ruled out the theory. The hearing was told the guesthouse did not have planning permission and that extra floors were being added to the building at the time.

Engineers for the church maintained the building’s foundations were sound but the Council for the Regulation of Engineering in Nigeria said it could not support the addition of more floors.  Komolafe dismissed Joshua’s claims in his ruling, which recorded that the victims likely died from multiple injuries, including fractured skulls, caused by the collapse.

“The collapse was as a result of structural failures,” he said, calling for the prosecution of the two engineers used by the church.

South Africa said it “notes and welcomes” the end of the inquest.

“Government hopes that the conclusion of the inquest will assist the families who lost their loved ones in the tragedy to find closure,” said acting Cabinet spokeswoman Phumla Williams.

Supporters of Joshua, who have alleged a conspiracy against the SCOAN leader, gathered outside the court in Nigeria’s second city for the ruling but there was again no sign of the preacher and televangelist.

Komolafe noted that of the 32 witnesses called, Joshua, who counts powerful politicians across Africa among his flock, was the only one not to turn up.

“Among the individuals and organisations summoned, only Prophet TB Joshua refused to testify,” he told the court.

“He went to court, challenged the jurisdiction of the coroner to summon him and the high court ruled he should come. But he still went ahead to the appeal court to challenge the ruling.” Lagos State government lawyer Akingbolahan Adeniran described the ruling as “fantastic“.

“The court has given its verdict, which confirms our position in Lagos state that people’s lives are more important,” he told reporters.

“Some individuals and organisations have been indicted and even recommended for trial. The state will look into this and see those to be prosecuted.” The tragedy was not an isolated incident in Lagos, where buildings have collapsed due to sub-standard or adulterated materials, shoddy construction or poor maintenance.

Komolafe urged the relevant authorities to carry out viability tests on other buildings at the SCOAN to ensure they were structurally sound after hearing they were poorly constructed.

Building permission must be obtained for any construction in the state and qualified professionals used, he recommended.

But Olalekan Ojo, a lawyer for Joshua and the church, said it was “unfortunate” the coroner ignored submissions that “having building approval is not (a) panacea for building collapse“.

“The court also ruled that there was no nexus between the hovering aircraft and the collapsed structure. By so doing the court has ignored the testimony of the police,” he added.  “We, as the legal team, will sit and if there is any need to take further steps to have the verdict reviewed we will do so.”