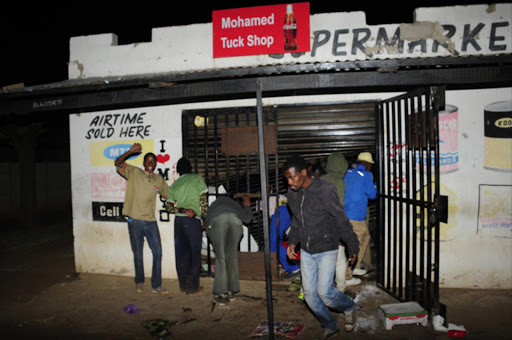 FILE PHOTO: Violence erupted across Sebokeng into the early hours of Tuesday after a Pakistani male killed a street vendor Josiah Ngwenya in Evaton. Young people looted foreign owned shops in Sebokeng in retaliation to the murder. Photo Thulani Mbele

Foreign traders have been caught in the crossfire of service delivery protests in Ledig Village, near Sun City in the North West province. Shops have been looted and forced to close down as community members charged through the village, demanding action from local government.

The protests, which began on Saturday, concern allegations of corruption by a local councillor, known as DJ. Residents believe that the councillor misappropriated millions of rands in the form of royalties from a local mine; the funds were intended for the community.

As the protests escalated, with protestors burning tyres and wood, foreign-owned businesses were looted and many business owners have moved their stock and closed shop for fear of being targeted by locals.

“All the shops in Ledig have closed down – and many saw this as an opportunity to start looting from the foreigners. They are following in the footsteps of the rest of South Africa,” said a local resident, who asked not to be named.

In an attempt to put a stop to the protests, local government officials went to Ledig, but failed to reach an agreement with the community. Residents say protests will continue until the councillor, and all those involved in the misuse of the funds, are arrested and held to account.

Roads were blocked off and schools shut down earlier this week, but the situation now appears to be under control

But Sun City police station spokesperson Brigadier Thulani Ngubane told The Daily Vox that nobody would be released until they had their day in court.

“If people continue to break the law, then we will arrest more people. We will protect anyone who dwells within the republic,” said Ngubane. Police are continuing to monitor the situation.