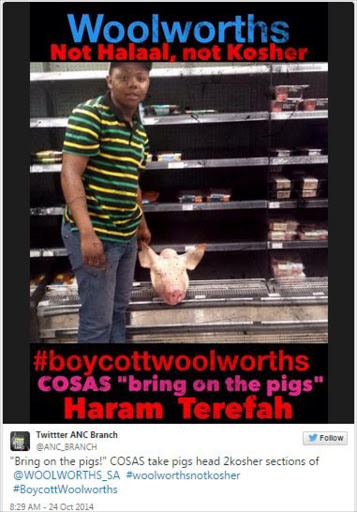 "We have placed the pigs head in Woolworths to show these people of God that Woolworths is Haraam and it is not Kosher.”

* This story has been updated.

Are you ready for your weekend facepalm? The ANC-affiliated Congress of South African Students (Cosas) has decided that a good way to show support for the Boycott, Divestment and Sanctions (BDS) movement, which aims to put pressure on Israel to change its policies concerning Palestine through economic means, would be to put pigs heads in the kosher and halaal sections of the nearest Woolworths.

COSAS will be delivering pigs heads to the kosher meat sections of @WOOLWORTHS_SA - yesterday Seapoint received this. pic.twitter.com/UgoG0qfsdj

The first tweets on the topic mentioned only the kosher sections of the Woolworths stores, raising questions about whether the campaign may be anti-semitic in nature, but it later emerged that Cosas was targeting both kosher and halaal food sections.

Some tweets on the issue were retweeted from the BDS South Africa account without comment. These have since been deleted.

It’s unclear exactly how Cosas came to the conclusion that putting a pig’s head in the kosher or halaal section of a food market would be an effective way to show support for Palestinians. It’s also unclear why BDS South Africa would seemingly endorse the clearly offensive tactic with unqualified retweets.

The shocking decision to drag pigs heads into kosher sections at Woolworths is an affront to Jewish religious laws, which state that Jewish followers may not consume pig meat. Similarly, Muslims are not allowed to eat pork products and pigs are viewed as unclean.

A Woolworths representative confirmed that the incident had occurred but clarified that while some of the tweets allege that the pig’s head was placed in the kosher section of the store, the area depicted in the tweets is in fact the halaal food section.

In a statement released on Friday afternoon, Cosas said, “It is unacceptable that people, especially those who claim to believe in God to buy products from supporters of Israel. We will not allow people who will not eat pork, to pretend that they are eating clean meat, when it is sold by hands dripping with the blood of Palestinian children. Woolworths is NOT Kosher. We cannot allow food like this to be called halaal or Kosher, it is dirty food – the dirtiest food. We have placed the pigs head in Woolworths to show these people of God that Woolworths is Haraam and it is not Kosher.”

The student organisation’s motto is “Each One Teach One”, but its inflammatory action against Jewish and Muslim citizens this week may leave Cosas needing to re-think its position.

The BDS movement embarked on a much-publicised boycott of Woolworths following Israel’s bombardment of Gaza earlier this year, and has called for Israeli produce to be removed from shelves. The campaign has since grown with support from notable politicians, including EFF leader Julius Malema.

The movement was criticised when pro-Palestinian protestors shouted “Shoot the Jew” at a BDS rally last year and has worked to distance itself from accusations of anti-semitism.

In a statement released Friday, BDS South Africa said it had not “supported, endorsed or encouraged” the action, which it described as “very controversial … form of militant human rights action” that “may not have been properly thought through”.

BDS South Africa said it hoped the incident would not be used as a distraction from its #BoycottWoolworths campaign.

If there’s a silver lining to this cloud, it’s that Cosas may have helped to bring supporters of Israel and Palestine together – in condemnation of their pig-headed tactics that is.

*Correction: An earlier version of this story implied that Cosas’s actions were aimed at the Jewish community alone, rather than at both Muslim and Jewish communities. This has now been updated to indicate that Cosas is an equal opportunity offender.