Why is Grabouw rioting? 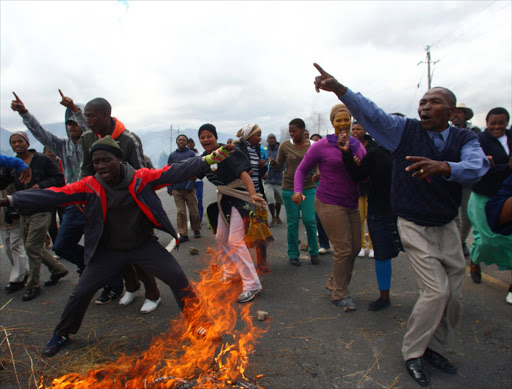 Reasons for the ongoing violence in the small Western Cape town of Grabouw include lack of service delivery, political interference, and a "third force".

Service delivery was the most obvious one, according to the Grabouw Civic Organisation (GCO).

A list of demands was handed to Theewaterskloof municipal officials after two protest marches, the first on August 20, and the second on Monday.

Despite heavy rains bringing a semblance of calm and relief, the town was still smouldering on Thursday with reports of at least two houses set alight overnight.

Access to the N2 highway was blocked for three days and there was extensive damage to private and public property. Workers were intimidated and local businesses closed.

Twelve schools in the area were closed in the middle of the preliminary matric exams and more than 5000 pupils were sent home.

The question being asked, however, is whether service delivery is the real reason for the violence.

Grabouw is seen as the economic centre of the Theewaterskloof municipality which is made up of seven towns - Villiersdorp, Bot River, Caledon/Myddleton, Riviersonderend, Greyton, and Genadendal.

The region is the heart of the country's fruit industry and one of the main contributors to the Western Cape economy.

"We don't deny that there are problems with service delivery," said Punt.

"We are doing our best with the contributions from the central government and local tax income."

However, he said African National Congress and SA Communist Party representatives were open about their threat of destabilising the region.

"They are trying to make it ungovernable leading to the 2016 local elections," Punt claimed.

He was at the Grabouw municipal office to receive a service delivery memorandum on Monday. More than 1000 protesters gathered and the violence erupted soon after.

"I was present when Maurentia Gillion announced unambiguously that the protest was part of the plan to disrupt the region so that the ANC can regain control," he said, referring to Monday's gathering.

Gillion is the ANC's Overberg MPL and former mayor of the Overberg district municipality, which includes the Theewaterskloof municipality.

GCO chairman John Michels frequently threatened to make the Theewaterskloof municipality uncontrollable, claiming that a lack of service delivery was his motivation.

He has been at the helm of every protest action in Grabouw for several years and has been supported by various other groups in the past, including the Building and Allied Workers Union of SA, and Black Association of the Wine and Spirit Industry during the farm workers' strikes last year.

"Michels says destabilising the area is his main aim. He knows it is in his power to cause disruption and he has shown in the past that he can do it," said Punt.

"It is clearly the aim not only of Michels, but of Gillion and the ANC.

"However, they won't succeed and the polling booths will be the final judges," he said.

They rejected Punt's argument about the ANC's plans to destabilise the area.

GCO secretary Margaret le Roux said: "He is trying to shy away from the issues of service delivery."

Zwai Bhangazana, another GCO member and ANC supporter, said: "There was no sign that our demands for service delivery would be met satisfactorily."

He speculated this could lead to a continuation of the protests.

"As long as Punt continues to claim that the cause of the unrest is ANC plans for destabilisation there will be no possibility of finding a solution," Le Roux said.

Speaking for the group, Nojoko said: "I am originally from Uitenhage in the Eastern Cape and now live in Waterworks. We are local supporters of the ANC and the SACP."

He said Theewaterskloof municipal representatives were not forthcoming and this would lead to a continuation of the unrest.

Asked why Michels was not at the meeting, Le Roux said he had been missing for two days.

"There have been several threats against his life and we are really scared that he might be lying in a ditch somewhere," Le Roux said.

The municipality issued a statement after the meeting listing all the grievances in the protest memorandum and detailed answers.

A prominent member of the recently formed Elgin Grabouw Ratepayers and Residents Association (EGRRA) said the organisation was deeply concerned about the violence.

"We are getting no feedback from politicians, police, community safety officials, or the farmers' association," EGRRA said in a statement.

"Rumours are circulating of deaths, looting, a new school, and the traffic department being burned down and continued violence until Friday or Saturday.

"Workers are being prevented from getting to work and the national road is closed. The only information we are receiving is from the farm watch over the radios."

The group called on authorities to take control of the situation before more damage was done to the town and its economy.

Another emergency meeting was held at the Grabouw police station late Wednesday afternoon. It was attended by the chairpersons of the community policing forums from Grabouw, Caledon, Greyton, Genadendal, Villiersdorp, and Riviersonderend.

There was some speculation that a "third force", which nobody could pin down nor take responsibility for, was to blame for the protests.

Unfortunately, there were no GCO representatives or senior police members at the meeting.

An EGRRA member said: "We're getting an 'abandoned' sort of feeling here."