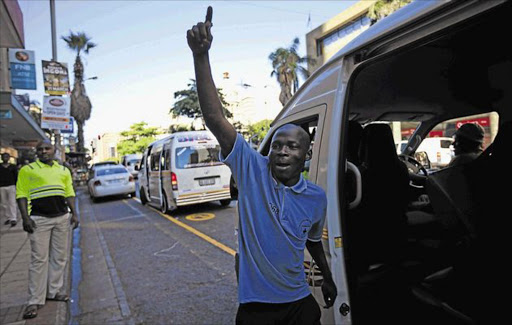 She said the roll-out of the N2 Express service should not adversely affect those who offered transport in those areas.

As a result, the two affected taxi associations would nominate drivers to receive training at the Golden Arrow Bus Service learning and assessment centre in Montana.

These drivers would complete classes to upgrade their licences from Code eight to 11.

The city would foot the training bill of R29,200 per driver.

"All of the trainees will be offered employment as MyCiTi bus drivers once they have passed a diagnostic assessment, learner's licence test, driver's licence test, and route and product training," De Lille said.

Those drivers who did not qualify for training because they did not have a Grade 10 would be helped by the city with an adult basic education and training course.

This numeracy and literacy training would begin as soon as the taxi associations submitted the names and documents for the candidates.

"In addition, the local residents and enterprises in Khayelitsha and Mitchells Plain are benefiting from the construction of the station and bus stops through employment as subcontractors and labourers."

The N2 Express service would be rolled out in two phases, the first on July 5 and the second five months later.

The total cost of the construction projects was around R40 million.

The service would use a fleet of 40 buses to transport people in the two areas to the city, using the new low-floor buses on the N2 highway. These buses allowed people with disabilities to use the service.

De Lille said one of the core goals of the city was to create an enabling environment for investment and job creation.