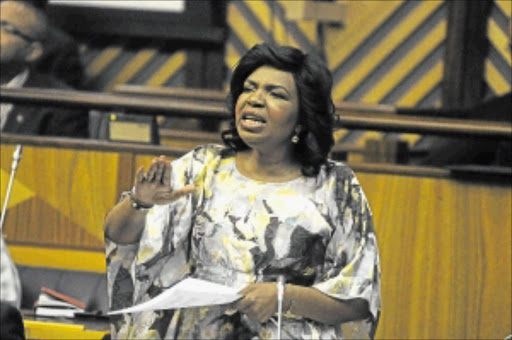 A report detailing misconduct by former communications minister Dina Pule has recommended that it be referred to the police and the National Prosecuting Authority for possible investigation.

The report, which was tabled in Parliament on Wednesday, found that Pule had "wilfully misled" Parliament's ethics committee by denying her romantic relationship with a man who allegedly made millions from sponsorship deals with her former department.

The report was compiled by a nine-member, multi-party panel which recommended that Pule be docked a month's salary, and that she be reprimanded in the National Assembly by Speaker Max Sisulu.

The ethics committee adopted the full report, which was sent to the National Assembly for approval.

Pule was found guilty of failing to disclose the interests of her romantic partner Phosane Mngqibisa.

He benefited financially from the sponsorship of last year's information and communications technology event, the ICT Indaba, which her department hosted in Cape Town.

"We found her guilty of failing to declare her relationship with Mr Mngqibisa," said joint committee chair Ben Turok.

"She failed to declare the fact that he received material benefits which are financial and otherwise, and in failing to do so she broke the rules of the code of conduct of Parliament."

The panel's report was sent to the National Assembly (NA) and to Pule. Turok said the penalties could be imposed only if the NA approved the report.

"We are recommending a reprimand by the Speaker in the House, a 30-days' salary equivalent fine, and 15-days' suspension from all the committees in Parliament," Turok said.

The Democratic Alliance welcomed the findings.

"The DA is pleased that the multiparty ethics committee was unanimous in its decision to impose the strictest possible penalties available to Parliament in this case," said MP Diane Kohler-Barnard, who served on the committee.

Pule consistently denied during panel hearings that Mngqibisa was her permanent companion, insisting he was a "friend".

However, testimony showed that he accompanied her on various trips abroad and had shared her hotel suites.

According to the report: "Honourable Pule's testimony under oath regarding her relationship with Mr Mngqibisa is inconsistent with the facts, as is her statement regarding Telkom."

Telkom was one of several sponsors of the ICT Indaba.

Pule claimed the sponsorship from Telkom had been obtained prior to her becoming communications minister last year.

"However, the contract of sponsorship is signed on 10 May 2012, when Honourable Pule was already in office," the report stated.

"The committee notes the concealment of the relationship by Honourable Pule enabled Mr Mngqibisa to gain improper financial benefit."

Pule was cleared of only one of the allegations against her.

"On the allegation that the Honourable Pule breached paragraph seven of the code [of conduct of Parliament] in that she received a pair of Christian Louboutin shoes as a gift from Mr Mngqibisa, the panel finds that there is no breach. There was not sufficient evidence to prove the allegation."

Pule was sacked from Cabinet in a reshuffle by President Jacob Zuma last month, but she remains an MP.