Crumbling school 'a risk to pupils' 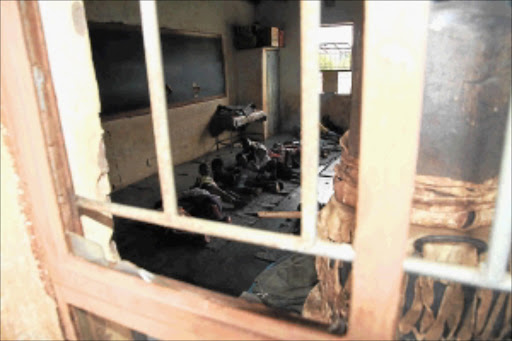 DANGEROUS: One of the classrooms with no windows at the dilapidated Ndlovu Primary School in Limpopo. Inspectors of the provincial department of labour closed six classrooms at the school. PHOTO: Elijah Mushwana

PUPILS at a rural school in Limpopo have been having lessons under dangerous conditions.

Inspectors from the provincial department of labour on Monday ordered a six-classroom building at Ndlovu Primary School at GaLedwaba village in Lebowakgomo to closed.

The inspectors immediately closed the building, saying they feared for the safety of both pupils and teachers.

The school, which has eight teachers, has 185 pupils between grades R and seven.

According to education authorities, the structure was built in 1960 and no renovations or improvements had ever taken place.

The school's roof looks like it will curve in any time, with cracks visible from a distance. Most of the windows are broken and the floors are pock-marked and cracked.

The pupils say snakes and other creepy creatures are also an ever-present danger .

The department of labour's Johannes Mokou said they had realised that the building posed a real danger to both pupils and teachers. He said it was not suitable for human habitation and could cause injuries or death.

Mokou said the school building did not comply with the Occupational Health and Safety Act.

The school still has the use of two classrooms in another building which now has to accommodate all the pupils.

Paulina Ledwaba, chairwoman of the governing body, said they had informed the provincial department of education "on several occasions about the dangerous conditions at the school, but we have not received any positive response".

"We have requested land from local authorities so that another building can be erected," Ledwaba said.

She said the closure of the building would not affect year-end examinations.

Provincial education department spokesman Pat Kgomo said: "We acknowledge that the school is very old. We are working on an immediate plan to make sure pupils and teachers are safe.

"We also call upon the private sector to join us in providing better and safer schools."