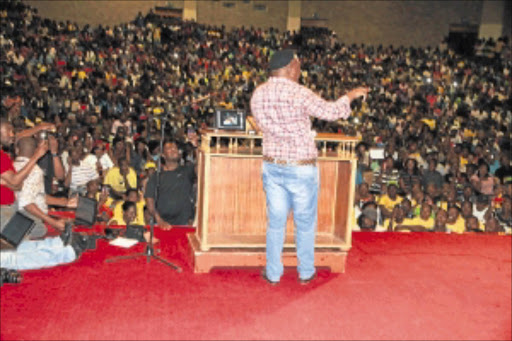 "There is a need for change in Mangaung. We cannot afford to have Zuma for another term as president. Zuma is brainless, including his people of Nkandla"

Speaking to students at the University of Limpopo's Turfloop campus on Tuesday night, Malema touched on the coming ANC elective conference in December.

"There is a need for change in Mangaung. We cannot afford to have Zuma for another term as president. Zuma is brainless, including his people of Nkandla," he said in reference to Zuma's homestead in KwaZulu-Natal.

"An imagination (image) of Zuma sitting on that chair until 2017 is traumatic."

Malema delivered his speech at the Onkgopotse Tiro Hall with a huge ANCYL banner in thebackground, despite the ANC's ruling barring him from addressing any gathering under the party's banner.

He urged student leaders at the university to fight for the rights of students.

"We do not want leaders who succumb to management and spend a lot of time in management offices while students are struggling outside," said Malema to loud cheers.

He started his address by congratulating the institution's ANCYL branch leadership for winning the recently held SRC elections.

Malema also called on the student leadership to ensure there were no long queues when students applied for NSFAS - a students' bursary loan scheme. - frankm@sowetan.co.za