Squatters to march against evictions 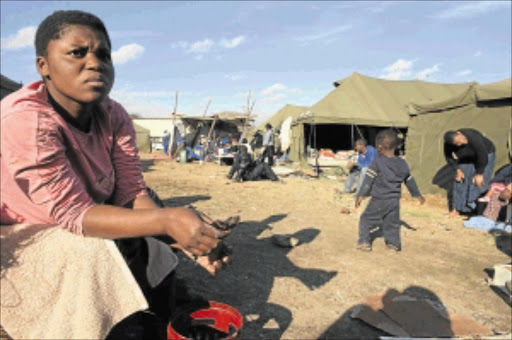 DESTITUTE: Nina Nyamushu sits outside one of the tents provided by NGOs after the eviction of squatters in Marlboro, northern Johannesburg, three weeks ago. PHOTO: Tsheko Kabasia

THE squatters who were evicted from an industrial site in Marlboro, Johannesburg, by the City of Johannesburg, have vowed to take their fight to the street after losing a court battle two weeks ago.

About 150 families, who are now staying in six military tents, a few metres from where they were evicted, said they would bring Johannesburg city centre to a halt tomorrow when they march to Premier Nomvula Mokonyane's offices.

Organised under the banner of the Informal Settlement Network (ISN), a social movement and Federation of the Urban Poor (Fedup) - the nonprofit organisation working with the informal settlement, backyard and pavement dweller communities - described the march as the "mother of all marches" by homeless people. The squatters had argued in a court hearing that the eviction, which was carried out by the Johannesburg Metropolitan Police, was illegal because it was done without a court order. But Judge Nare Kgomo dismissed the matter.

Jeffrey Mokoena of ISN said the march would be attended by all their structures in Gauteng.

"All our six regions will be there. We will have people from Johannesburg which has 154 informal settlements, Ekurhuleni with 131, Mogale City with seven, Tshwane with 55, and Midvaal with 10. In addition, there will be backyard and street pavement dwellers and hostel dwellers. The whole of Gauteng will attend this mother of all marches," Mokoena said.

The tents, in which the squatters now live, were bought with the help of ISN and Fedup. Families have been separated as men now live in their own tents while the women and children stay in the other tents.

Pumla Mamkeli, who has a nine-year-old child and five-months-old twins, described life in the tents as terrible.

"It is terrible here. Water runs into the tents when it rains. The blankets are wet. Children suffer from flu because we have to make fire inside the tents to cook.

City ofJohannesburg spokesman Gabu Tugwana said he was not aware of the march. Mokonyane's spokesman, Thebe Mohatle, said the office of the premier had not received any letter from the metro police, informing them of the intended march.