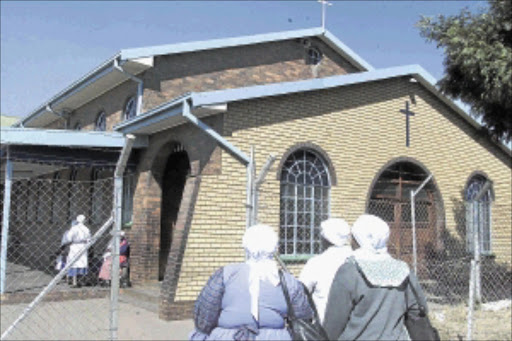 NO WAYS: A dispute between factions of the St John's Apostolic Faith Mission in Katlehong is going to court. PHOTO: Dudu Zitha.

FACTIONS within the St Johns Apostolic Faith Mission Church in Katlehong in Ekurhuleni are hauling each other to the Johannesburg High Court.

This is not the first time the church has approached the courts to settle its leadership disputes.

The case will go to court at the end of the month.

This time a faction led by a former secretary of the church, Simon Mofokeng, wants to take power from Bishop Gladys Lindiwe Maragu.

Maragu is the widow of the late Archbishop Jacob Maragu, who led the church until his death in 2005.

In 2004, a court interdict stripped Maragu of his leadership after he was accused of wanting to amend the church's constitution to make way for his wife to lead when he died.

Her husband Lazarus was the first bishop. MaNku, as she was known, selected her son Johannes to succeed her but John Masango challenged this, first through elections, which he won, and then by taking the matter to the supreme court after he was expelled. In 1971, Masango was declared the new archbishop.