'Malema must fight his own battle and not involve the king' 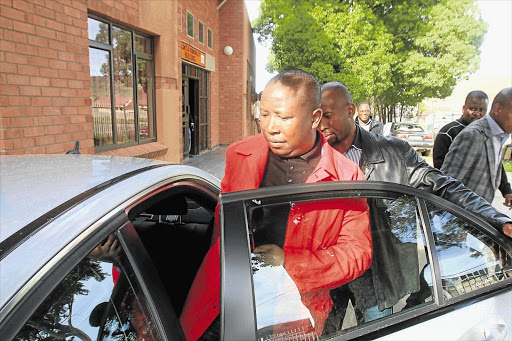 However, the former ANC Youth League president received a warmer reception from hundreds of supporters who attended a rally he addressed at Walter Sisulu University in Mthatha.

Before speaking at the rally at Walter Sisulu University in Mthatha, Malema was supposed to have met Dalindyebo at the Great Place before the rally at 11am.

The visit was supposed to be a salute and a way of showing Malema’s respect to Dalindyebo since he was visiting his kingdom.

The king had apparently agreed to the visit earlier in the week, but changed his mind yesterday.

Instead of a traditional welcome of men and women singing and dancing, about seven armed no-nonsense security guards armed with automatic rifles and shotguns were posted at the main gate from about 10am with clear instructions not to allow Malema and his entourage to enter.

The security guards were from Calculama Security Services, owned by Ronnie Matshaya, a former bodyguard of Oliver Tambo and an MK operative. The king's spokeswoman is Ronnie Matshaya’s sister. The security services were apparently rendered for free.

The Daily Dispatch was told that Malema and his entourage were on their way to the Great Place but had to turn around when they learnt they were not welcome.

“Bumbane is not a battlefield to fight cheap politics. We don’t want people who confused AbaThembu. Everyone knows that Malema is expelled from the ANC.

“They were actually tempted to use the king cheap. Bumbane is not a place for horses to die,” said Dalindyebo’s spokeswoman Phumla Matshaya.

“The king has his own battle to fight. He will always refuse to be used as a launching pad for others to fight their wars. We cannot allow Malema a visit while the political climate is not conducive to do so.

“Malema must fight his own battle and not involve the king.”

The king was also at the main gate to supervise the proceedings.

The guards were ordered to target only Malema and his entourage as other visitors, including the media, were allowed entry.

“The decision not to allow the visit was a decision that was decided upon by the king and the MKVA high command,” she said.

Matshaya added that the king was in conversation with President Jacob Zuma pertaining to issues affecting the kingdom, but she would not be drawn on whether he supported Zuma or Malema.

Nkosi Mfundo Mtirara, the king’s clan cousin and an ANC councillor in the King Sabata Dalindyebo Municipality, said the king was influenced by certain individuals to reject Malema.

“It is surprising, because the king informed me that he was expecting Malema this morning. Then he called me again to say that I must apologise to Malema that he could not see him today.

“The king said that he would set another date for Malema’s visit to the great place,” said Mtirara.

Mtirara and another Dalindyebo aide, Nkosi Jonas JJ Ndzambule, were later seen sitting with Malema and his entourage at the rally at Walter Sisulu University.

Members of the Friends of the Youth League declined to comment on Malema not being allowed entry at Bumbane.

Malema told the rally he would continue talking as long as the ANC expected his vote, adding that he would die loyal to the ANC.

He also warned that the ANC would be different after the forthcoming Mangaung conference.