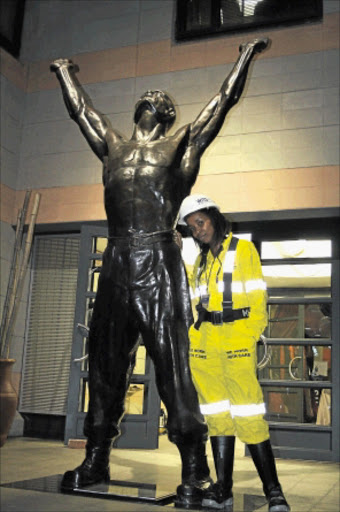 YOU GO GIRL: Third-year mining engineering student Mpeo Mahase stands next to the sculpture of the Unknown Miner at the University of the Witwatersrand. PHOTO: BAFANA MAHLANGU

A SCULPTURE donated by the son of the late artist Herman Wald has been unveiled by the University of Witwatersrand in celebration of the institution's 90th anniversary.

The sculptor honours miners who died after the discovery of gold in Johannesburg.

The sculpture, donated by Wald's son Louis, stands at the entrance to the university's Chamber of Mines Building.

It was commissioned in the 1950s by Harry Oppenheimer, who asked Wald to make two pieces to celebrate the life of his father, Sir Ernest Oppenheimer. One was to be in placed in Kimberley and the other in Johannesburg.

The sculpture in Kimberley forms the Diamond Diggers Fountain and was installed in 1959. It depicts a group of five miners holding up a sieve.

According to the university, the three-metre 'Unknown Miner' sculptor "serves as a reminder of the importance of mining and education to South Africa's economy.

Third year mining student Mpeo Mahase said: "The sculpture reminds me of the sacrifices the miners before me made. It will also help me appreciate everyone who is involved in the mining industry because it contributes to our country's economy."