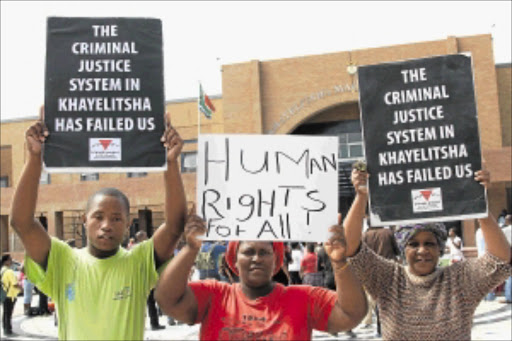 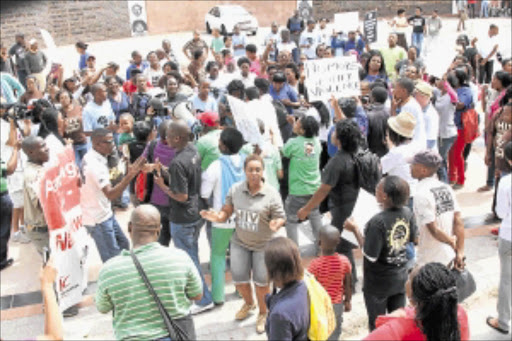 MONICA Madindi wept uncontrollably when the men who killed her lesbian daughter six years ago were sentenced in the Khayelitsha Magistrate's Court yesterday.

Her daughter Zoliswa Nkonyana was gang-raped and then murdered in February 2006.

Madindi could not speak after magistrate Raadiyah Wathen sentenced Lubabalo Ntlabathi, Sabelo Mase, Luyanda Londzi and Mbulelo Damba to 18 years in jail each. Four years of the 18-year sentences were suspended for five years.

Her husband, Gladstone Mandindi, said: "We are not entirely happy but a sentence is a sentence."

The four were found guilty of murdering Nkonyana in October. They have 14 days to appeal the sentence.

The case had provoked outrage among activists because it had been postponed several times.

It is not the first time in South Africa that men are sent to jail for killing lesbian women.

In September 2009 two men - Themba Mvubu and Thato Mphithi - were sentenced to life imprisonment and 32 years, respectively, for the murder of former Banyana Banyana star Eudy Simelane. She was killed in April 2008.

Passing sentence in the Nkonyana case yesterday, Wathen said: "The sentence should be a deterrent to crime and also be a lesson to would-be criminals."

The court took into account the five years the men spent in jail as prisoners awaiting trial.

Wathen said a suspended sentence or correctional supervision was not appropriate because the accused had not shown any remorse.

"You have not shown remorse for your actions. It shows that you can do crime again in future," he said.

"I don't think she was a threat to the accused. The murder was driven by hatred. You must face the consequences for your actions."

Wathen said the court had considered the nature of the crime, the interests of the community and the rights of the accused when it passed the sentence.

"Peer pressure and alcohol had also played a role in the accused's behaviour and actions to brutally murder Zoliswa," he said.

"People live in a diverse society and the country's Constitution allowed people to choose whatever way they wanted to live. It was Zoliswa's choice to live as a lesbian but the accused did not like her lifestyle."

She also said all the accused were underage and also pupils at the time of the incident.

Wathen indicated that the case had attracted a lot of interest from the media and the communities and it was of critical importance that the case be resolved.

About 200 people protested outside court. Jill Henderson, a research and advocacy coordinator at Triangle Angle - an NGO that fights for the rights of gay and lesbian people in Khayelitsha - said: "We are happy that for the first time in a case sexual orientation was considered as an aggravating factor.

"We are also happy with the sentence.

"The magistrate had to consider that at the time some of the accused were 18 when the crime happened. I think the sentence is quite substantial."