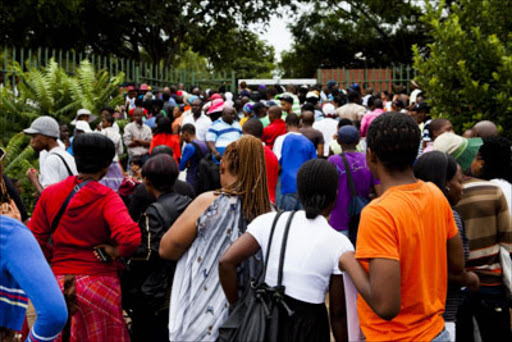 The mother of a prospective student died and 20 people were injured in a stampede at the University of Johannesburg this morning, the city's Emergency Management Services said.

“There were 20 injured patients and the female who died has been  confirmed as the mother of one of the students,” spokeswoman Nana Radebe said.

Two of the injured were in a critical condition in hospital, she said.

Thousands of shocked prospective students and their parents stood outside the university after the stampede, where they were applying for a place.

“The news that someone has died has shocked me,” said Jane Monare, who drove up from Bethlehem with her daughter in the early hours of the morning.Her daughter plans to study mechanical engineering.

“I wonder why the university administration did not do something about this in order to avert this problem,” she said.

“No one is saying anything to us, to tell us what will happen,” said Monare. “I wish the education system can be improved to avoid such incidents.”

Some prospective students had slept on the pavement waiting for the gates to open.

Abandoned blankets, clothes and shoes — most of them wet from the overnight rain — were strewn on the pavement outside the Bunting road entrance to the university.

Many ambulances and police cars were still parked at the entrance, and police and university security staff were not allowing anybody in.

Carol Mkhonto, from the Eastern Cape, had been about 300 metres from the main entrance before the stampede.

She wanted to check the status of her application. She tried last week, but was told it was “not in the system” so was making another attempt.

“I feel very bad about this,” she said.

Mkhonto said that putting people who were returning for further study and newcomers in the same registration queue had caused the problem.

“There was a stampede because of congestion because the university put everyone who wanted to renew and the newcomers in the same queue.”

Radebe said earlier they received a call around 7.30 am to say there had been a stampede just after the gates opened.

The injured were treated in an emergency vehicle at the university and then taken to hospital.

One of the critically injured had sustained severe head and chest trauma. She was taken to the Charlotte Maxeke Johannesburg Academic hospital for treatment, Netcare911 spokesman Jeff Wicks said.

The SA Youth Council was “dismayed” by the stampede.

“The university, after its experience of similar situations, should have found better means of dealing with such crises and it’s  important that we raise this issue across the entirety of the higher education fraternity,” said national spokesman Mangaliso Khonza.

The university received 5,000 applications from new entrants on Monday.

TimesLive reported that last year there were 11,000 first-year places available and that the university processed 85,000 applications.

The situation was similar at other universities.

The University of the Witwatersrand, in Johannesburg, which has 5,500 spaces for first years, received 30,000 applications last year.

The Democratic Alliance in Gauteng said the university should have handled the applications process better, but at the same time,  some students had unrealistic expectations as their marks would not  be good enough.

“Many of them should rather enrol at the Further Education and Training (FET) colleges, but these colleges need to dramatically improve their pass rate so that they can attract more applicants,” said the party’s education spokesman Khume Ramulifho.

“Two of the reasons for the long queues at UJ are the lack of adequate career guidance at secondary level and a lack of confidence in FETs.”

UJ is a merger between the former Rand Afrikaans University, the  Technikon Witwatersrand and the Soweto and the East Rand campuses of Vista University.

It also has a four-language policy of English, isiZulu, Afrikaans and Sesotho sa Leboa.

Its students come from over 50 countries in Africa and around the world.