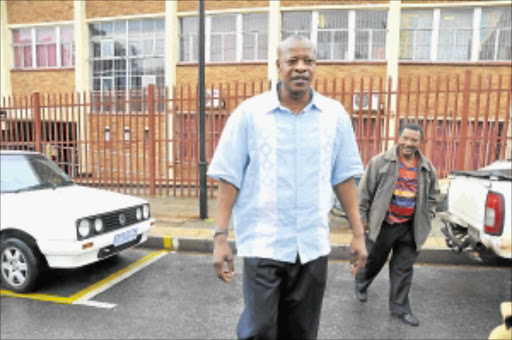 ACQUITTED: Poet Mzwakhe Mbuli outside the Germiston Magistrate's Court where he was on trial. PHOTO: VATHISWA RUSELO.

THE "People's Poet", Mzwakhe Mbuli, is suing the state for R10-million for malicious prosecution.

Mbuli's lawyers, Jerry Koma and Donald Somo, say in a statement sent to Sowetan that the poet has briefed them to act against the state.

"The state's case has been peppered with contradicting testimonies from state witnesses, and a slew of inconsistencies on behalf of the prosecution against Mbuli that sealed its fate and has reversed the legal tables, so to speak, with his acquittal," they say in the statement.

Mbuli was arrested after his uncle, Mandlankosi Mbuli, was gunned down by two men at Leondale in Ekurhuleni in 2008.

He was accused of pointing a firearm and of assault, kidnapping and intimidating five people while demanding to know who had killed his uncle. Mbuli's case dragged on for two years, with witnesses disappearing on the days they were to testify.

The case finally came to an end when magistrate Isabel Mlaba acquitted Mbuli in the Germiston Magistrate's Court in April last year of all charges.

While Mbuli's name was cleared in court the poet "suffered humiliation" during the dragged-out case.

"It was a traumatic experience even psychologically. For two years I was going to court. It was very hard," Mbuli said.

He said the court process had severely affected his music career.

"Would you want to buy Jub Jub's CD while he is going to court for killing four children. Who would buy a CD of Mzwakhe Mbuli who is out on bail for kidnapping, pointing a firearm and assault," Mbuli said.

"Promoters think twice before calling you to concerts. Airplay is also affected (when you are still going to court)."

But what frustrates him is that since his uncle's death there had been little effort to find those who killed him.

"Police have not visited my uncle's widow, not even once, since my uncle was murdered," Mbuli said.

l In 1997 Mbuli was sentenced in the Pretoria Regional Court to 13 years in jail for armed robbery. He spent five years in Leeuwkop Prison and was released on parole in November 2003.