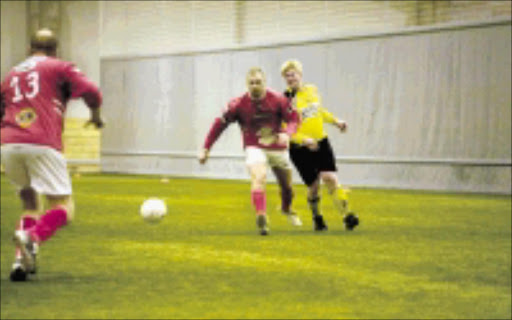 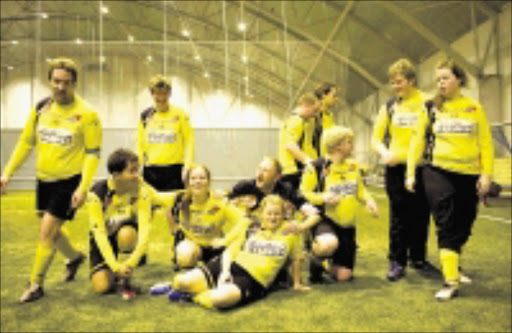 A small victory is being celebrated in Oslo.

A small victory is being celebrated in Oslo.

In a big indoor soccer stadium belonging to top Norwegian club side Lillestrom, with seven players from each team exchanging high fives and jokes as they shoot for another goal, the referee whistles for a restart.

The celebration has little to do with goals, cups, or league tables. The victory is about learning disabilities and mental problems.

Almost all the players from both sides are intellectually challenged. The striker is autistic, the winger has attention deficit disorder and others are epileptic, dyslexic and with many other disabilities.

The coordinator for the Norwegian FA is 51-year-old Anders Krystad.

With gold earrings all over one ear, he looks more like an ageing biker than a facilitator of disabled footballers, but that's his role, and he enjoys the work.

"I used to work full-time with the FA and have also worked for a professional club, Valengra in Oslo. But I got bored with the spoilt 18-year-old players demanding millions. I wanted to work with the grassroots level. Now I deal mainly with disabled players and people of different ethnicities," says Krystad.

His most important project is Colourful Football. The campaign was started by Oslo club Valerenga in the mid 1990s.

The original plan was to fight racism, homophobia and violence; and to find ways to integrate people with minority cultural and ethnic backgrounds. In recent years it has expanded to benefit players with disabilities and special needs.

"Since 1996 we held Colourful Football tournaments for boys and girls aged between 12 and 14 years, but we deal with all ages. The teams comprised of seven players each with at least four girls in each squad."

Krystad also mentions a team of drug addicts in Tromso.

"Junkies are very difficult to deal with because they never attend training and tournaments. They would miss their doctors' appointments, meal times, meetings and even skip spending Christmas Day with their families. Nothing matters to them," says Krystad.

His main concern is for the disabled players. He helps to run a league of similar teams across the country. The Norwegian FA now administers 75 members with disabilities.

Krystad explains that though the games might not be the most skilful in Europe, they are always competitive.

"Everyone likes to win, no matter what their talent level. Sometimes we have a real problem with cheats, coming from the teams that have many non-disabled players. The referees are tasked to watch for that. This takes a lot of investment in time and money, but the professional clubs are generous to help."

The therapeutic value of football for the disabled is undisputed. The players participate in social activities, interact with one another and this is exercise for people with mental disabilities since they are prone to over-eating. The "runarounds" boost endorphin levels, which helps counter depression and autistic introversion. The players also learn self-respect.

"Many of the players have very severe disabilities. We have guys who don't even know their own name and who can't even tie their shoelaces," says Anders.

Krystad applauds a decent header then returns to his base.

"Because of their kind of disability you might find that many people laugh at the mentally disabled. Yet when the players come out here they feel like part of a team and they feel better about themselves. A great example of this is the guy over there," says Krystad and shouts for the players to come over.

Martin Samdvik, a 29-year-old blond guy approaches. Krystad tells us he has an unspecified learning disability. Like many in these teams, he is averse to discussing himself in terms of diagnosis or conditions. He would rather talk about what he can do than what he can't.

Krystad gave him a chance and trusts him to overcome severe difficulties in his life.

After a period of isolation, loneliness, hospitalisation and being jobless, Sandvik now has a girlfriend, a flat and a purpose in life. He also became something of a talisman to the rest of the Disabled Football movement in Norway, not least because he started his own team.

He was also a Norwegian representative at the Special Olympics and had the opportunity to meet George Bush in the Oval Office.

He talks about his life with definite courage, almost carefree, despite his stuttering speech.

"I started playing when I was eight. At the age of 16 I had to attend a special school, which made me feel pretty bad. I had very low self-esteem and I hated being called a spastic.

"I suffered much abuse, but after a few years decided to do something about it. I wrote to the authorities and asked if I could start my own team. Luckily they approved.

"I gathered all my friends from the special school to join me. The team received so much press and TV coverage and this encouraged us," says Martin.

He points at the pitch where his team is being beaten by their closest rivals.

"What is so good is that the team becomes like a family," says Sandvik.

As if to prove his point at that moment, a player runs off the pitch, falls to the floor and starts bucking and writhing. He is having an epileptic fit. A doctor runs over and attends to him. The players gather around, concerned, but not interfering. Seizures are not uncommon in disabled football.

Ten minutes later the player is sitting up, sucking on a water bottle while the rest of the team carries on with the game. And so they continue with their lives.