Teenager gives birth at gate with help of guards 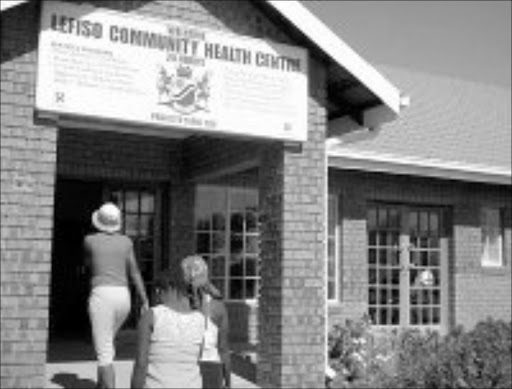 HALF DAY: The clinic where you can only get help during the day at other tiems you could bleed to death waiting for a nurse. Pic. Alfred Moselakgomo. © Sowetan.

A 17-year-old teenager gave birth at a Mpumalanga clinic's gate because the nurse assigned to duty was on leave.

But Maria Ngobeni, of Driefontein in Moutse, was helped by the clinic's security guards and gave birth to a healthy baby girl last week.

When Ngobeni arrived at the clinic at about 8pm she was told that it was closed because the nurse assigned to the night shift was on maternity leave. The clinic is supposed to operate around the clock.

When Sowetan visited the mother at the weekend, she said she was too weak to talk. The child, Mmathapelo, meaning "prayer", was in the care of her grandmother.

Sophie Ngobeni, said her daughter was saved by God's grace.

"My daughter travelled more than 20km to Lefiso Clinic, just to be told that it was closed," said Sophie Ngobeni.

The grandmother appealed to the Health Department to urgently deal with the crisis at the clinic.

"The next victim might not be as lucky as my daughter. This problem needs to be sorted out before someone dies," she said.

Mpho Gabashane, a provincial health spokesman, said that if the department had known that the nurse who should have been on duty was on leave it would have found a replacement.

The provincial Health Department said it was experiencing a shortage of nurses.

Gabashane said the department was trying to recruit more nurses.

"We have asked nurses from the neighbouring hospital, in Mmametlhake, to help at Lefiso Clinic until new nurses have been appointed," said Gabashane.

Maria Ngobeni's ordeal came barely a month after the DA in the province said the continued negligence in state hospitals was unacceptable.

The DA said the government was gambling with the lives of people by not appointing enough competent staff.