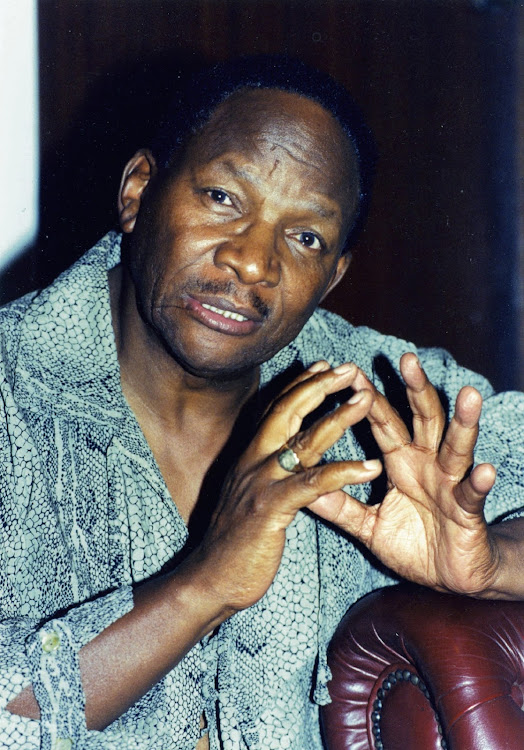 TV stars and directors have come together to celebrate the contribution made by the late "father of black theatre", Gibson Kente, to the industry by unveiling a tombstone.

The group calls itself Together Folks, a slogan coined by Kente himself. It is made up  of actors and directors who are all products of Gibson Kente School in Dube, Soweto.  The group said it was installing and unveiling Kente’s tombstone because it wanted to show appreciation to a man who contributed to their careers.

Together Folks got Khaabo Tombstones in Soweto to donate a stone befitting a man of Kente’s stature. Kente,who was famously known as Bra Gibb, died 17 years ago on November 7. He wrote popular productions like Manana the Jazz Prophet, Sikalo, How Long, Too late, Mama’s Love, The Call and many more.

Sebezo said: “As his protégés, it is important to remember him this way.  Kente played a big role in the theatre and TV industry.  I am one of his products and I have won awards because of Bra Gibb's teachings and mentoring. We are thankful that the family allowed us to do this for him.”

The group said Kente's family will unveil the tombstone  to honour his legacy. . "Bra Gibb trained, guided and mentored some of the most accomplished stage, TV and film performers in South Africa and this tombstone will unmistakably mark the final resting place of the father of township theatre, who during his heyday captured the imagination of South Africa and inspired many young artists with his powerful and dynamic musical plays.”

Nthato Nkwadi of Khaabo Tombstones has committed to donate a stone worth between R75,000 and R150,000. He said since Kente was a colourful human being, the tombstone will be a personification of his character.

Kente’s sister, Nomathemba Kela, said her brother had invested a lot in SA arts and had created stars and so deserved to be honoured.

“We have given the group our blessings and we appreciate the initiative taken by them. We will work closely with them to make sure that the unveiling becomes a success. Bra Gibb should not be forgotten and his story should be part of South African history and heritage. Local television is dominated by his talent.”

Kela said she was saddened that some of Kente’s wishes had not yet become a reality even 17 years after his death. She said just before Kente died, he had called a family meeting and shared his wishes regarding his legacy.

“He wanted his house to be turned into a museum but that has not happened because there have been challenges. The house is in a bad state as we speak.  Since he is a crucial part of South African history we would appreciate if the government could assist in turning the house into one of the heritage sites and attract tourists to the place,” she said.

The unveiling will be held on November 7 and the service will take place at the Soweto Theatre in Jabulani.