‘The octopus walking on the ocean floor — that’s me’

Ronan Skillen speaks about making music for the underwater world of the Cape kelp forest in My Octopus Teacher, the first SA documentary to win an Oscar. 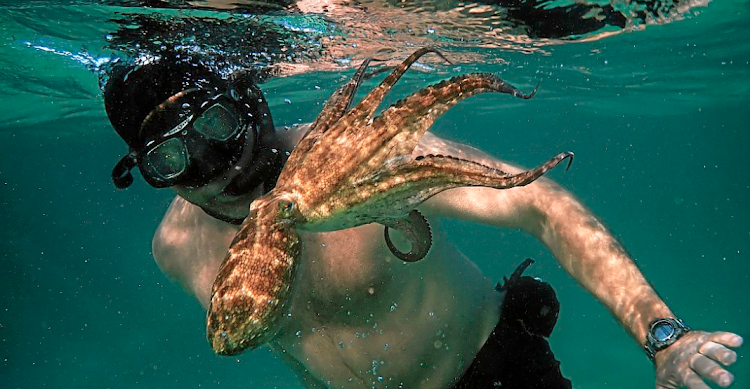 “Think of what I did,” says multi-percussionist Ronan Skillen, “as adding a sprinkling of plankton.”

Skillen is talking about his role providing additional music for the Netflix documentary My Octopus Teacher. The film is the first original Netflix documentary to be made in SA, has won multiple awards including a Bafta, and is one of only a handful of South African films ever to make it to an Academy Awards shortlist. Then, on Sunday April 25, it won the Oscar for Best Documentary.

My Octopus Teacher narrates filmmaker and freediver Craig Foster’s year of following a wild octopus through the Great African Sea Forest, the dense kelp forest of the Cape coast. The film explores how Foster’s study transformed his own outlook, and what he learnt about the ocean ecosystem. SA’s ocean kelp forests have not yet felt the full impact of global warming. But worldwide, ocean kelp forests are disappearing at four times the rate of the rainforests.

The main score for the film was composed by Kevin Smuts and has itself already taken this year’s International Documentary Association award for Best Music Score. How Skillen got involved — and the subsequent project that involvement led to — follows a trajectory established long ago as the musician discovered his passion for what he calls “tangible sound: the physical as well as the emotional feel of playing an instrument”.

Born in Ireland, and following family travels that led to his acquiring skills on the classical French horn in a German high school, Skillen has been a Cape Town resident since 2003. It was improvisers Babu — with drummer Kesivan Naidoo, bassist Shane Cooper and guitarist Reza Khota — that introduced his sound more widely.

But it was much earlier, at 17, when he acquired a didgeridoo, that “I suddenly realised I didn’t have to play only what was written down — I’ve never touched the French horn since!” A Cape Town encounter with revered tabla player Ustad Akram Khan led to four spells in India studying legacy rhythm, including the syllable-based Carnatic system: “It’s like a poem; if you can say something, you can play it.”

Subsequently, Skillen has used his skills in multiple contexts, including Deep South, Ancient Agents and most recently, for his electronic didgi-taal project, Walker.

It was at a Cape Town club that My Octopus Teacher co-director, Pippa Ehrlich, first heard him play. “Later, she called me out of the blue about a movie she felt ‘needed something extra’.” Erlich sent Skillen some clips of relevant scenes, he sent some initial ideas, and then Ehrlich, Foster and his son Tom all assembled in Skillen’s tiny home studio. “We set up two screens, laid out literally every instrument I had, and worked solidly for three hours ... It was a beautiful collaboration. I’ve created scores before to a brief but this was completely different.

“I needed to make the sound work for them and blended myself in so much that I can’t always remember what’s me. But the octopus walking on the ocean floor — that’s me. The team drew on my ability to make the feeling they were hearing, and we used everything, however unlikely the instrument.”

Instruments are a broad church for Skillen. As well as conventional drums, he picks up all kinds of potential sound-makers on his weekly hikes. At this point in our Zoom conversation he brandishes a bundle of dried reeds to produce a sibilant rattling sound: an example of what he calls “shrubbery that interests me in a sonic way ... My biggest inspiration is the natural world.”

Skillen admires the film — “Craig turned a slightly strange scientific study into an emotional, human story” — and has since established a friendship with Foster and Tom and gone diving with them.

And from that beginning, the sounds of the Cape kelp forest found a new platform: the Amphibious Soul project.

Says Skillen: “Craig rang me up and said, ‘Some guy called Yo-yo Ma just phoned me — do you know who he is?’” The award-winning American cellist and United Nations Messenger of Peace had encountered the film and hoped to record some original music related to his environmental concerns during his early-2020 visit to Cape Town.

Foster and Skillen contacted guitarist and producer Jonny Blundell from Rootspring, vocalist Zolani Mahola, legendary singer and umhrube (bow) player Madosini and bassist Bryden Bolton and others to become the Seachange Collective, “and we went hunting for things to make sounds with”.

Among others, they found shark-egg cocoons, mussel shells and “a whale ear bone with an amazing resonance if you hit it underwater; a cuttlefish shell that I added strings to; and an ancient, huge abalone shell whose pitch changes as you submerge and raise it”.

And then there’s the “octopus drum”: the voice of the kelp forest itself, which Skillen crafted as a tuned drum cut from eight different lengths of hollow kelp stem. The artists performed what they were developing for Ma in early February 2020 in Cape Town, and were supposed to play with him in New York for the UN 75th anniversary. “Meanwhile, we were working continuously on the song, and Zolani in particular was getting increasingly absorbed by the natural world of the ocean.”

Instead of travelling, the team sent Ma a backing track, which he did indeed use during the concert. They hope that as Covid-19 restrictions lift, Amphibious Soul will have legs (or perhaps fins) again as a live performance. No recording has yet been issued. In many senses, My Octopus Teacher began another learning experience for Skillen. He found new collaborators and friends and explored the underwater world and its pirates’ chest of potential percussion. “To Kevin’s already very fine score,” he says, “I added some textures and colours. Listeners may not even know where those sounds are coming from, but they hear the layers. In total, it might not have been much more than 5%. But as Craig says in the movie: under water, every little creature has its role.”

*This article was first published by New Frame.