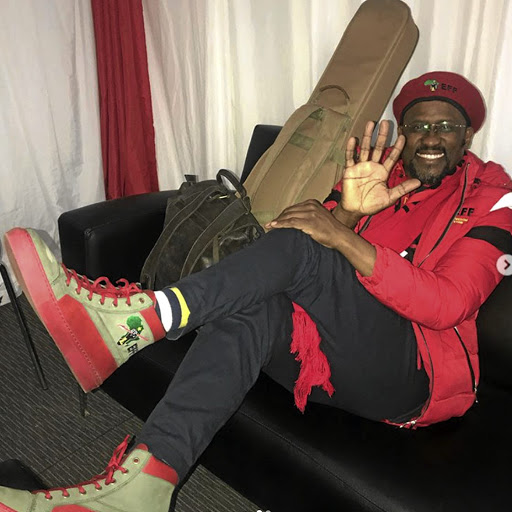 Afro-pop singer Ringo Madlingozi is happy to mix music with politics, via his affiliation to the EFF.
Image: Instagram

Ringo Madlingozi has rung in changes in his political allegiances and is not shy to nail his colours to the mast.

The legendary Afro-pop musician has ditched the ANC that he said he supported all his life and swapped the black, green and gold for the red beret of the EFF.

The star of Ndiyagodola fame said he was an active ANC member in the Buccleuch branch for 12 years and before that spent years as a supporter growing up in Cape Town and moving to Johannesburg.

Madlingozi said he joined the EFF because of the party's ideology about free tertiary education and the equal distribution of land. The singer further explained that he did not have a position, he was just an ordinary Fighter.

"Everyone always knew that I care about people on the ground. I represent the struggles of black people in my music," Madlingozi said.

"This move did not shock people because I have been fighting the struggle for years. Joining EFF was the best decision I have made to continue fighting."

Lately, Madlingozi has been sharing his activism and campaigns with the Julius Malema-led party. It has not been without attack and criticism.

He said his detractors have warned him that this public stance would come back to haunt him, but he is not fazed.

Madlingozi is a staunch EFF member.
Lifestyle
3 years ago

"I'm against that theory that musicians should not show their political affiliation.

"I'm an artist and by virtue I'm part and parcel of the country's politics. I don't think it is something that I should worry about," he said.

The award-winning musician sparked debates when he began posting photographs in EFF regalia and re-posting the speeches of Malema, the party's leader.

Whenever he posts, it becomes clear that his fans are divided in their responses. One fan praised Madlingozi for joining the party, telling him that he would be led by an educated leadership.

He said industry players have raised their concerns to him that he was shooting himself on the foot with his latest move. They believe this could result in his music career struggling due to victimisation. But Madlingozi explained that he was not worried about the backlash.

"I don't think there is a problem when I show that I'm a Fighter. Previously people knew that I was an ANC member.

"I still got the support from even those who were not ANC or politics supporters".

He added that others might not understand the ideology of the EFF because they were afraid of change but it was going to yield positive results.

Beef with record label now over, thanks to Juju.
News
3 years ago
Next Article