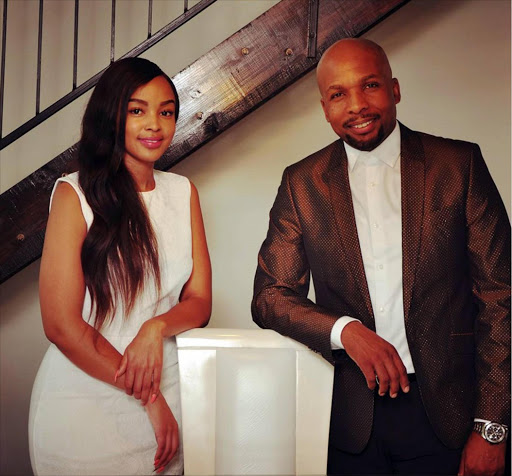 Business tycoon Lebo Gunguluza and his wife Lebo Mokoena have put on a united front after their sex tape was leaked on social media this week.

The video was circulated widely on Facebook and shared on WhatsApp.

Gunguluza, famous for his role in the television reality show Dragon's Den, yesterday told Sowetan that Mokoena's phone was stolen in the VIP section of an event they attended last October. He said they blocked the phone after 48 hours but didn't delete the content saved on the icloud.

Gunguluza said the other scenario could be that when Mokoena exchanged phones the content was picked up by someone else. "We suspect that after the thieves discovered that I'm pretty well known they [decided to make] the video public," said Gunguluza.

"It's an old video that we took in Cape Town two years ago on holiday. It was even before our son was born.

"There's nothing wrong I did with my wife. It was our own private video that she wanted to keep at home. It was to keep memories of our holidays.

"We were having our own fun as a married couple and not cheating on anyone. We were being faithful. It's important for families to practice fidelity.

"I was pleasing my wife and it ended up on wrong hands, unfortunately. Our privacy has been invaded. "

He said they never received any demands of ransom or payment before the video went public. "We live in unsafe times where we cannot protect our content. People hack into phones and access iCloud and even steal phones, no one is safe," said Gunguluza.

He said public support had been good. "People have been extremely supportive, and funny enough complimenting how beautiful my wife is, while others say I'm gifted."

Gunguluza, who heads up several companies, said he has assembled a team of IT experts to investigate the source of the leak. He is also seeking legal advice to ensure that those who shared or distributed the video would be charged with cyber invasion of privacy.

Mokoena echoed her husband's statements: "As a family our privacy was grossly invaded, but we remain united and love each other more than ever before. I have always been a private person and supportive of my husband. We still have great plans for our future."

Gunguluza dismissed calls from detractors who believed that he should not be included in future seasons of Dragon's Den. "This has nothing to do with my professional life. It happened on my wife's phone."

"Whoever distributed this thought they were hurting me, but we are still going to enjoy each other for a long time and not apologise for that," he said.