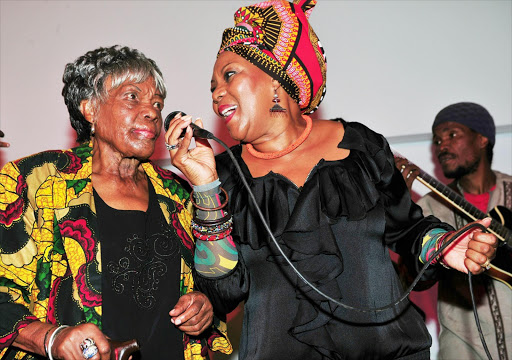 Legendary musician Thandi Klaasen performing with her daughter, Lorraine at the the Huddleson Centre in Sophiatown. Pic. Veli Nhlapo./ Sowetan

Thandi Klaasen’s daughter‚ Lorraine Klaasen will serenade jazz lovers’ during a two-night tribute concert in honour of her mother‚ who died in January after a long battle with pancreatic cancer.

Lorraine‚ who is set to take to the stage to pay tribute to her mom‚ told TshisaLIVE that this concert was part of her healing process.

“The concert is part of my healing process‚ to honour my mother the best way I know how. I also don’t want her memory to just wither away and so I plan on keeping her music alive to ensure that she is never forgotten‚” she said.

Lorraine added that she also hoped the series of tribute concerts would help raise funds needed to open The Thandi Klaasen Foundation for Burn Survivors.

When Lorraine takes to the stage later this month it will be the first time since her mother’s death‚ who she often used to perform with on stages across the globe.

“This will be a very special show and a beginning of a new era for me‚” she said.

Lorraine added that she would perform some of her favourite songs from her mom’s repetoire. She also hopes to reintroduce some of her mother’s songs that she feels were often overlooked.

“Many people only know Sophiatown because it has been played repeatedly. But I will also do songs I have performed with my mom all over the world on our collaborations. One of my favourite songs is her rendition of Summertime‚ because she took that song and made it her own‚” Lorraine said.

The tribute concerts will take place on March 24 and March 25 at Niki’s Jazz Restaurant in Newtown.