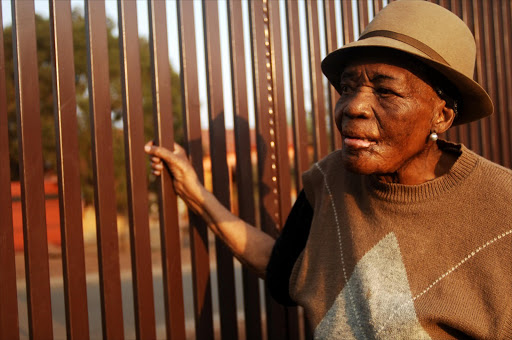 Thandi Klaasen during the interview with Sowetan at her home in Alberton. Photo Ziphozonke Lushaba © Sowetan

The late Thandi Klaasen is more famous in death than she was in life.

This is what legendary trumpeter Hugh Masekela told Sowetan during an exclusive interview where he made it clear why he had not eulogised Klaasen, who died on Sunday.

"I played with her in African Jazz in 1956 and I've never seen her so famous as in death.

"Every news bulletin and television station, every half an hour, they talk about her, but when she was alive she was hardly there.

"So whenever they call me I always say I don't do death. How come you never called me when she was alive?"

Klaasen's demise following a battle with pancreatic cancer shot up her name to national prominence and has seen politicians and industry heavyweights gather to mourn her at her house in Eden Park on the East Rand.

But the iconic and outspoken Masekela said he was reluctant to pay tributes to Klaasen in death because she was not that celebrated in life.

He did, however, share that he'd known Klaasen all his life.

Masekela said he had as such boycotted the too-little, too-late tributes.

"It's funny. They (the media) have been calling me about Thandi.

Every time somebody dies they call me and I say 'why didn't you call me when she was alive?'

"I don't like commenting on people's deaths, especially when they had a rough life.

"What embarrasses me the most is that they send young people who never even knew the deceased. I can't talk about a person I have deep respect for in that way. And who are you? Did you know her? So for you it's just a news item?"

Klaasen will be buried next Friday in Boksburg.

This is not the first time Masekela chooses to go mum over the death or sickness of an icon. He infamously asked not to be interviewed for Nelson Mandela's birthday or when he was ill.

"That's why some people got pissed off with me whenever they called me for Mandela things. I would say: 'Hey, there are other people involved in this country. He didn't create South Africa. So every time he has a cough you call me? Come on'."

Jazz queen lives on in song

Iconic kwela, jazz and blues music star Thandi Klaasen who died on Sunday was a true musical stalwart and activist throughout her career.

She died after she being diagnosed with pancreatic cancer.

Born Thandi Nelly Klaasen on September 18 1931 in Sophiatown, she was one of the greatest jazz singers who emerged in the '50s.

With a career that spanned over six decades, Klaasen had a multi-octave voice that dived deep and soared high as she wished.

There was a natural appeal in her vocals. Perhaps it was because she sang her songs with a smile, capitalising on her innate ebullience.

Klaasen gave one the impression that she knew of what she sang about. That's why she will always be remembered for her unique skill of telling a story through a song.

Her song Sophiatown, for example, relates a sad story of how black people were removed from the cosmopolitan suburb of Johannesburg.

In the song, Klaasen shares the pain of how she never got a chance to say goodbye to a place where she was born and where her career blossomed. In terms of sound, Klaasen had no boundaries, dabbling with classic and African jazz, kwela, blues and a fusion of these and other sounds that made good music.

In the 1950s she performed with groups such as the Gaieties and the Harlem Swingsters. She also performed with the music stars of the day, such as Dorothy Masuka and the late Dolly Rathebe, Miriam Makeba, and Sophie Mgcina.

When her career took off, Klaasen toured the world and graced many jazz stages both locally and internationally. In the 1960s she starred in the internationally acclaimed musical King Kong by composer Todd Matshikiza.

For her amazing talent Klaasen received accolades, including the Order of the Baobab in Gold awarded for excellent achievement and contribution to music.

When the people of Sophiatown were forcefully removed in 1955, she moved to Dube in Soweto. She later relocated to Thokoza in Ekurhuleni and then settled in nearby Eden Park until her last day.

She is survived by two children, Roger Phambane and Lorraine Klaasen, five grandchildren and six great-grandchildren. Klaasen will be laid to rest on January 27.