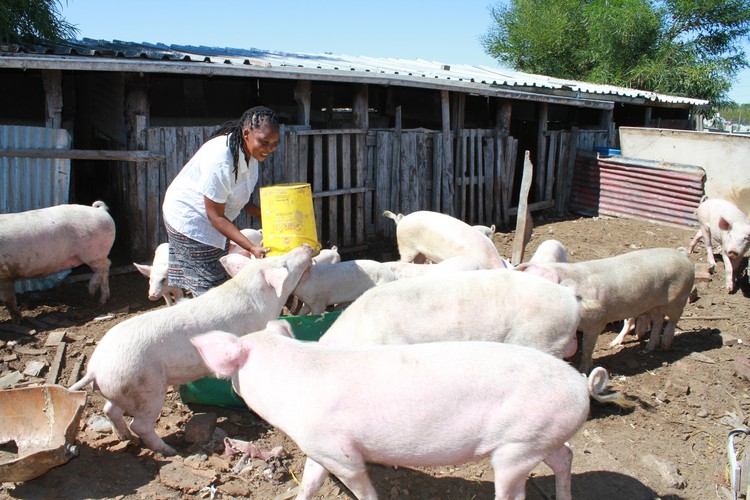 To be successful you have to love what you do, says Faure pig farmer Noncedo Khawuleza-Ndzawuse.
Image: GroundUp/Velani Ludidi

Khawuleza-Ndzawuse says she quit her security guard job in order to earn more money and spend more time with her family.

She was working an 11-hour shift. "It was not healthy for me. I would come back home and head straight to bed. I missed important family events and I could not make time for my kids."

Khawuleza-Ndzawuse, bought three pigs to start Ithemba Farm in Faure, where she has a shack and a big piece of land. Today, the 41-year-old mother of three has 30 pigs. She sells the pork mostly to vendors of braai meat.

"The business is doing well," she tells GroundUp.

"I saw an opportunity selling pigs. They grow easily and are not complicated to farm." Her clients are business people who own tshisanyamas, mainly in Mfuleni and Khayelitsha.

"It is better to be your own boss than work for someone else," she says. She learned about farming from her late grandfather in the Eastern Cape, who used to take her with him to attend to his livestock.

Ndzawuse feeds the pigs twice a day. Her challenge, she says, is access to water. There is none on her plot and she has to fetch water by car from taps several kilometres away. She and her two employees slaughter the animals themselves and take the carcasses to a nearby butchery for slicing.

"In order to make money you need to get dirty - and love what you are doing," says Khawuleza-Ndzawuse.

When Busisiwe Molefe started her own farming business, she had no idea that it would flourish in the international market.
Business
2 years ago
Next Article