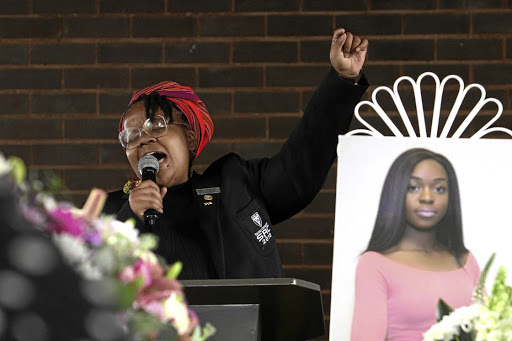 "Rape is not going to determine my destiny," says Moeletji Mapheto, 25, of Lebowakgomo, Limpopo, who was raped four years ago.

Her tale highlights the vulnerability of girls and young women in the communities they live in, as they have to contend with the spectre of rape and sexual harassment.

Mapheto was a third-year accounting science student at Wits University when she was attacked and raped in 2014. She was on her way from Tembisa to Joburg.

"It was a different experience for me altogether," she recalled [referring to Khensani Maseko].

"I knew from the beginning that it was not my fault and that my rapist had to pay.

"That initial self-affirmation made it easier for me to go and open a case of rape. I dealt with an investigating officer who was honest with me from the onset, that it will be a roller- coaster ride and I must prepare myself."

Mapheto, who is now a qualified chartered accountant, was raped two weeks before her mid-year exams.

Though she missed two of her four examinations and failed one module at the end of the year, she never gave up.

The brave Mapheto said she got through the ordeal by speaking openly about it.

"I used the university facilities for counselling and that helped me not to fall into depression. I am okay now, I don't fear for my life anymore.

"It is scary but I have developed a thick skin, hence I was never suicidal."

EFF leader Julius Malema has described the man who allegedly raped Rhodes University student Khensani Maseko as a “murderer” who must take full ...
News
2 years ago

The scourge of sexual and domestic violence against women and children is once again top of the news in the Women's Month as the country mourns the death of 23-year-old Khensani Maseko.

She committed suicide after she was raped in May, allegedly by her boyfriend.

Maseko was a third-year law student at Rhodes University when she took her life at her Alberton home last Friday.

She was laid to rest on Women's Day following a moving ceremony held at Nasrec Memorial Park, Joburg.

Her funeral, on Women's Day, was symbolic as it highlighted a formidable and horrifying threat to women's freedom in SA. The chilly weather during Maseko's burial also served to highlight the cold facts about the victimisation of women through gender-based violence, as speaker after speaker pointed out during the ceremony.

Rhodes vice-chancellor, Dr Sizwe Mabizela, told mourners that society failed Maseko because she suffered in silence for three months (since her rape) until she decided to end it all.

However, EFF Gauteng chairperson Mandisa Mashego gave Rhodes a tongue-lashing, saying Maseko would be alive today if they had allowed her to open a case.

Maseko's distraught mother Thembi Maseko could barely walk as her daughter's casket was carried into the hearse.

Khensani Maseko's friends‚ fellow students and the Rhodes University vice-chancellor praised her as an "incredible" leader.
News
2 years ago
Next Article