Comedy of errors as SABC mixes up its politicians 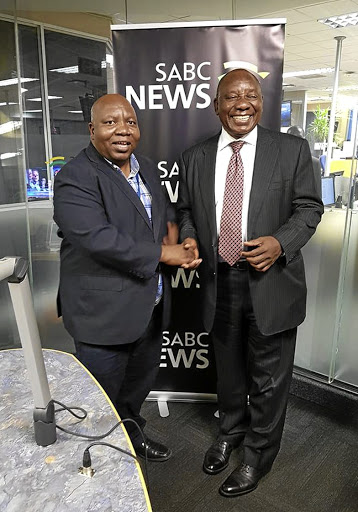 The SABC suffered yet another embarrassing on-air blooper on Thursday.

This after its presidential correspondent Mzwandile Mbeje mistakenly referred to President Cyril Ramaphosa as former president Jacob Zuma when covering an event in Angola attended by the SA president and his Angolan counterpart Joao Lourenco .

With a straight face Mbeje said: ". there we can see president Zuma and his counterpart from Angola ... inspecting a guard of honour there."

This angered SABC viewer Advocate Sam Muofhe who wrote to the broadcaster to complain. In the letter, which we have seen, Muofhe launched a broadside at the SABC and blamed its series of on-air bloopers on its failure to effectively implement its employee assistance programme (EAP).

"State President Matamela Cyril Ramaphosa on his very first official visit outside SA's boarders to Angola inter alia, to introduce himself to the president of Angola as the newly elected state president of South Africa, must have been astounded when he heard a journalist from SABC reporting the president's arrival and inspection of the guard of honor with his Angola counterpart, that in fact it was not him executing that honour but his predecessor, former president Gedleyihlekisa Jacob Zuma.

News anchor Peter Ndoro back at work on Monday

SABC news anchor Peter Ndoro is set to return to our TV screens on Monday after he was put on leave by the SABC following complaints of fatigue.
News
4 years ago

"Perhaps the SABC has to treat this creeping chronic ' exhaustion' of some of its senior journalists and newsreaders, seriously. We expect prompt quality reporting and news reading from our journalists and newsreaders. How does he get to know the Angolan president by name and mistake his current president for Zuma. My grandson who is eight years old knows who the current president is, and he knows his predecessor too," reads the letter.

Speaking to Sunday World yesterday, Muofhe said the SABC apologised to him and has vowed to take steps against Mbeje.

SABC spokesman Kaizer Kganyago said they have asked head of news Nonthando Maseko to investigate the matter and make sure that similar mistakes do not occur in future.

Mbethe's faux pas comes two weeks after his colleague Peter Ndoro was yanked off air after he mistakenly announced that Ramaphosa had died.

He had meant to announce the death of Zimbabwean Movement For Democratic Change (MDC) leader Morgan Tsvangirai. This was Ndoro's second recent mistake as he had also mistakenly killed IFP leader Mangosuthu Buthelezi when he had meant to refer to the death of former Bophuthatswana leader Lucas Mangope.

The comedy of errors played itself out again when another SABC2 Venda bulletin newsreader referred to Ramaphosa as "Jacob Ramaphosa".

Newsreader admits he is fatigued
News
4 years ago
Next Article