Grace Mugabe 'back in Zimbabwe' 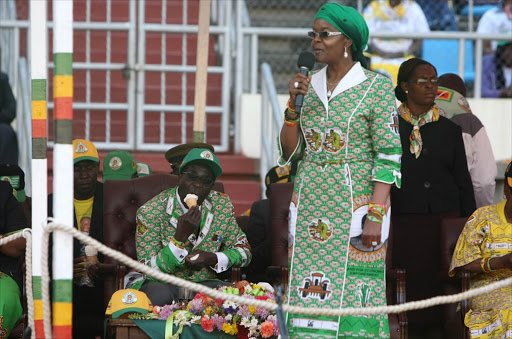 President Robert Mugabe flew back to Zimbabwe in the early hours of Sunday accompanied by his wife Grace‚ reports the Zimbabwe Broadcasting Corporation.

The couple were greeted by a delegation of government ministers when they arrived at Harare International Airport aboard an Air Zimbabwe aircraft – according to the state broadcaster.

Their departure follows high-level discussions in South Africa to grant her diplomatic immunity after a hotel rampage that saw Grace assault a woman and hotel staff in Sandton‚ Johannesburg.

It appears that the South African government has indeed granted her immunity.

The Sunday Times reported on Sunday that a waitress at the Capital 20 West hotel suffered a miscarriage in the fracas. Gabriella Engels‚ 20‚ laid a charge of assault with intent to do grievous bodily harm against Grace after allegedly being struck on the head with an electrical extension cord.

South African officials chose to remain coy on reports that Mugabe had left the country – despite police earlier saying they were on high alert to prevent her departure.

Spokesperson for the Department of International Relations and Cooperation Clayson Monyela did not answer any phone calls made to him by the reporter and when sent text questions on the matter Monyela only responded on Sunday with‚ “Please speak to SAPS”.

Monyela’s counterpart at the SA Police Service‚ Sally De Beer‚ was no more forthcoming‚ saying that she has never commented on the matter and referred the reporter to her colleague at the police service‚ Vishnu Naidoo.

When  Naidoo was contacted  for clarity on the matter we were met with the following recorded response: “Good day. If you are looking for information on the Sandton assault GBH case‚ until something significant develops I have nothing more to add.”