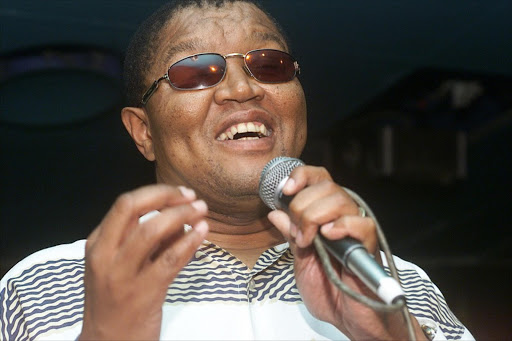 People have often say that when one sense dies, the other senses become stronger. This may be true when you look at the careers of these great musicians who as happened to be blind.

Is there a connection between their great talents and their blindness?

Singer songwriter Steve Kekana has been a special South African musician since the 80’s. He was born in 1958 in Zebediela Limpopo. He lost his sight at the age of five and attended a school for the blind in Pietersburg. He honed his singing in amateur music groups.

In 1979 and 1980, Kekana won what was then known as the “SABC Black Music Award" for Best Male Vocalist.
His duet with PJ Powers on the song "Feel So Strong" was seen as a catalyst to him attracting a new audience. He’s also collaborated with artists such as the late Nana Coyote and works with singer/ producer Joe Nina. Kekana, Coyote and Nina regularly appeared on stage together, and have recorded under the name “The Trio"
Kekana holds B Juries and LLB degrees, and has written on Intellectual Property from the perspective of a songwriter.

Born Stevland Hardaway Morris in 1950 and was a child prodigy as he was playing multiple instruments since a young age. He has been blind since after birth.

By the age of 11 Wonder had already signed with Motown.  “Fingertips” was his first big hit and his career took off from there. He has over 25 studio albums, with five live albums to his name, has won over 20 Grammys and was the second person after Paul Simon to be honored with the Library of Congress Gershwin Prize, an award given to a composer or performer for their lifetime contributions to popular music.

Born in Georgia USA in 1930, he began losing sight at the age of five. By age seven it was completely gone. By then he had already been bitten by the music bug, as his interest was sparked by a local Jazz pianist.

We’ve all seen the Ray where Jamie Foxx plays the role of the legend. In the movie Charles’ life on the road is depicted as he tries to carve his musical career before he settled down in Seattle.

He’s received awards such as the Rock and Roll Hall of Fame, won over ten Grammy awards and has been nominated a various number of times in the Emmy Awards. He passed away ten years ago at the age of 73.

Bocelli is the Italian singer songwriter born on 22 September in 1958. He was born with poor eyesight and became blind at the age of twelve following a football accident.

He has recorded fourteen solo studio albums; the albums are made up of two genres, Pop and Classical music. He’s sold over 100 million records worldwide making him one of the best selling musicians.

He can play the piano, flute, saxophone, trombone, guitar and the drums. He’s a great multitalented musician who’s managed to push boundaries by having his classical music at the top of pop charts globally.

Apl.de.ap, from Black Eyed Peas, whose real is Allan Pineda Lido Jr is legally blind after he was diagnosed with Nystagmus. The rare disease often causes his vision to go blurry, so much he can’t see.

Originally from The Philippines, the rapper came to America at the age of 14 to have an operation done to his eye it was involuntary moving due to the disease.

Although the disease has been with him nearly all his life, he’s been contributing to global phenomenon that is The Black Eyed Pease.  The group has released seven studio albums, with an eighth expected later this year that’s yet to be announced. The group has won more than twenty awards; From the Grammys, Brit awards, MTV, BET and many more.