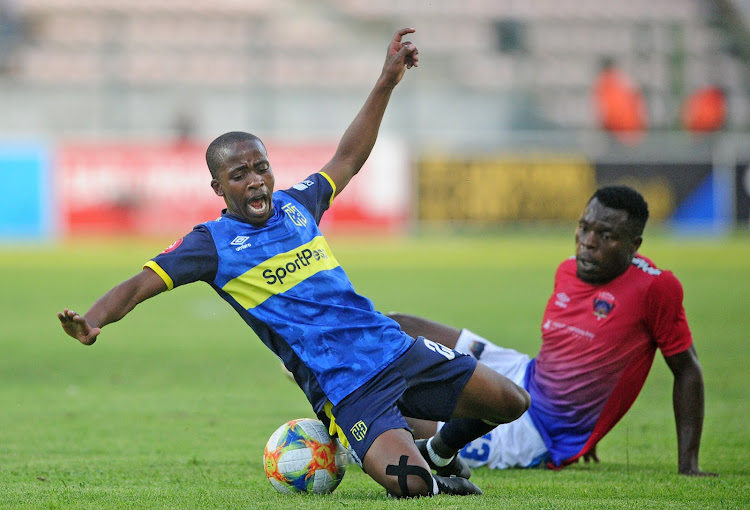 Thabo Nodada wants Cape Town City to show anger‚ fight and arrogance as they seek to pull themselves away from the relegation zone when they host BidVest Wits on Saturday.

City had hoped to vie for the Absa Premiership title this season‚ but have won only three of their 18 league games to date and instead find themselves just a point off the foot of the table.

They have had bad luck with injuries‚ but are yet to see the fruits of a change of coach after Dutch tactician Jan Olde Riekerink replaced Benni McCarthy.

Nodada says it is also up the players to take responsibility.

“A bit of arrogance‚” Nodada said when asked what the players needed to show against Wits.

“You don’t become a bad player overnight. To get some of that arrogance back will do us good. It will get everybody believing in their ability and knowing they can do it.

“We need to get that back‚ that arrogance that says‚ ‘hey‚ you are in Cape Town‚ you are playing against Thabo.

"You must know that you are playing against Thabo today’.”

Nodada says the players need to get back their belief and find the character to get back on the winning trail.

“That is the type of characters we need right now. A guy like Surprise [Ralani] has taken the ball in some tight situations and instead of passing responsibility to the next man‚ he dribbles one‚ he dribbles two and he shoots.

“To see him do that‚ I draw inspiration from that and when I get the ball next time‚ I don’t want to just give it away‚ I want to do something to benefit the team. That is the character we need right now.”

Nodada knows it will be a physical battle against Wits and says the players must rise the challenge and not back down when it comes to the confrontations on the pitch.

He hopes they might find a weary Wits though with The Clever Boys having played four matches on 10 days after Wednesday.

“We are expecting to spread the ball from left to right very well‚ as they did in the first game.

“We are expecting them to switch from right-back to left-wing throughout the game‚ we are excepting a lot of fight‚ hunger and determination.