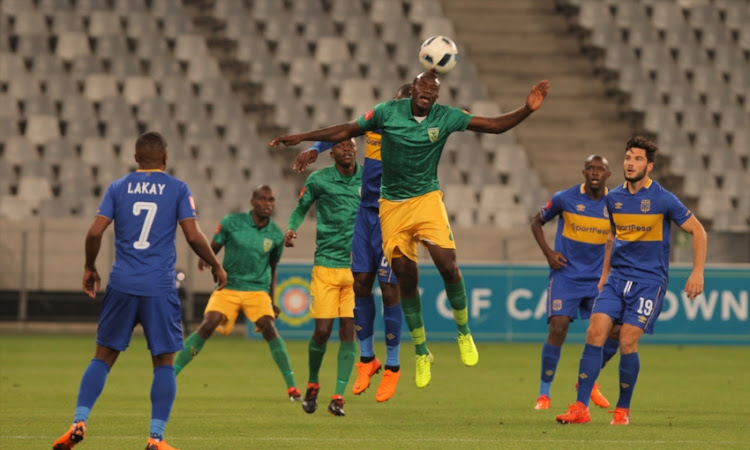 Forward Lerato Lamola scored the only goal of the game as Lamontville Golden Arrows secured a precious 1-0 away win at Cape Town City with a typical smash-and-grab in the Absa Premiership on Wednesday.

The victory eases the relegation worries of the Durban-based side who now have 30 points, but for City their top eight qualification is seriously in doubt as they dominated possession but could not find a way through the visitors’ stubborn defence.

Golden Arrows drafted in defender Nkanyiso Mngwengwe and midfielder Jabulani Shongwe from the side that lost 2-1 to Orlando Pirates almost three weeks ago, dropping livewire playmaker Siphelele Magubane to the bench.

The match was refereed by Masixole Bambiso, his fourth Absa Premiership assignment of which three have curiously involved Golden Arrows with the Durban side recording two wins and a draw.
City had the first sight of goal on 10 minutes as Thamsanqa Mkhize found space on the right and his intelligent ball into the box was perfect for Ayanda Patosi, who saw his goal-bound shot blocked.

Lyle Lakay forced a fine save from visiting goalkeeper Maximilian Mbaeva with a curling left-footed shot from 30-yards, while at the other end Danny Venter sent his shot from the edge of the box flashing across the face of goal.

Those were the only meaningful efforts in a first half in which City had all the ball and some pretty build-ups into the final third, but their final ball, cross or shot were disappointing.

Golden Arrows snatched the lead four minutes after halftime in typical fashion, a quick counter-attack that saw Venter cross from the right and Lamola side-foot home as he sneaked in between the two City central defenders.
Juma had been physically outmuscled for most of the evening, but when he did get his chance, a free header from Mkhize’s cross, he put it wide of goal.

Lamola was played into acres of space on the right and his pace took him towards goal, but he appeared to slip at the vital moment and produced neither a shot or a pass as the ball trickled towards Sage Stephens in the City goal.

Golden Arrows were by now finding joy on the break and Venter missed an excellent chance to double the advantage when he only had to turn the ball home in the six-yard box, but could not find the right connection.

Craig Martin failed to connect with a long ball at the into the box when he had just the keeper to beat, while there was an almighty goal-mouth scramble that saw Golden Arrows somehow keep the ball out of the net.

Mkhize also hit the outside of the post in injury-time as City pressed for the equaliser in vain.

Next up for City is an away trip to Maritzburg United on Saturday, while Golden Arrows host Free State Stars on the same day.