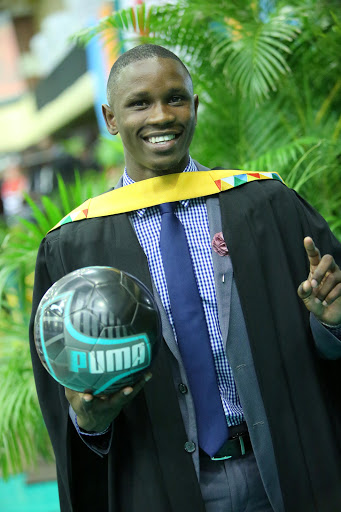 All over the world, footballers are known for earning sky-high salaries and living lavish lifestyles, but later struggle to make ends meet when their careers are over.

All over the world, footballers are known for earning sky-high salaries and living lavish lifestyles, but later struggle to make ends meet when their careers are over.

Golden Arrows striker Njabulo Sithole may be a special case, as he has ensured he's set for life after acquiring a Bachelor of Law (LLB) degree.

Sithole has been juggling football with education since 2013, and recently graduated at the University of KwaZulu-Natal.

"You should not limit yourself in life," he enthused when asked about his recent graduation . "I encourage other footballers to start planning for the future when they are still in prime of their careers."

He was part of the Abafana Bes'thende MultiChoice Diski Challenge (MDC) team that clinched the 2015 reserve league title.

The Bergville, KZN-born marksman was promoted to the Arrows first team in 2013. He singles out then Arrows coach Manqoba Mngqithi - now Sundowns assistant - as one of the people who helped him to crack top-flight football.

"As a youngster it was scary but also a good feeling to be part of an elite league outfit [Arrows]. Mngqithi played a big role in my development as a player. I will always be grateful to him."

It is apparent that Sithole has been prioritising his studies over his football career. The striker has only managed to register two appearances with no goal for Arrows's first team.

Nevertheless, it has not been all smooth sailing. "I once dislocated my right shoulder during a game. It came at a wrong time because I was busy writing examinations at school. I had to force myself, with pain, and I wrote my tests," the 22-year old recalled.

"My mother [Nokuthula] is a domestic worker and my father [Michael] is a clerk. At some point I had to awaken my father to help me read my notes. I am grateful to them because they have always been supportive," a chuffed Sithole said.

After his recent academic achievements, he has taken a year -long break from the beautiful game to pursue a master's degree in maritime law.