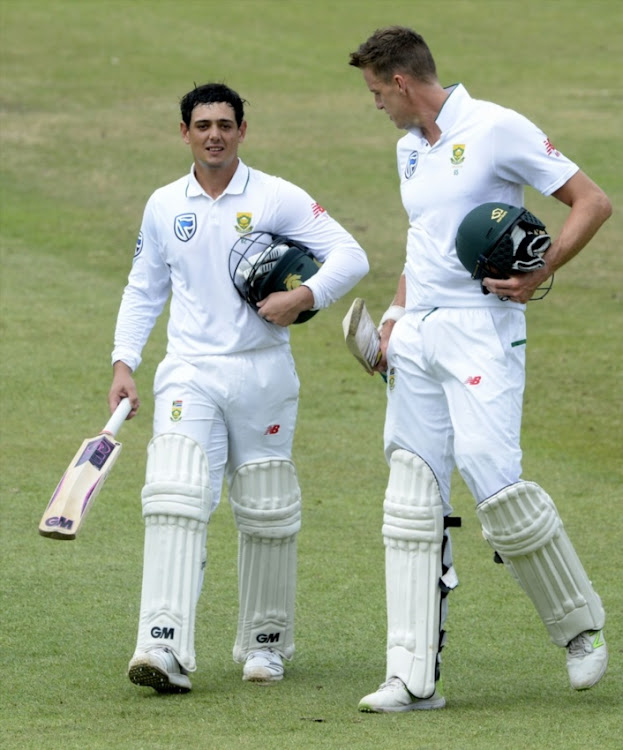 Quinton de Kock and Morne Morkel of the Proteas during day 5 of the 1st Sunfoil Test match between South Africa and Australia at Sahara Stadium Kingsmead on March 05, 2018 in Durban.
Image: Lee Warren/Gallo Images

David Warner has launched another verbal attack on Quinton de Kock‚ but this time it’s on the record.

Unlike what happened on the boundary and on a staircase at Kingsmead on Sunday‚ when Warner called De Kock a “f*cking sook [softie]” and then — in video that did not carry a soundtrack — unleashed a tirade on the South African that lasted all the way until the teams reached their dressingrooms‚ Warner’s words were recorded.

“I think you guys are well aware that I cop it left‚ right and centre‚ especially off the field from spectators‚” Warner was quoted as saying by the Melbourne Age.

“I am used to that and it doesn’t bother me.

“But in the proximity of my personal space and behind me‚ a comment that was vile and disgusting and about my wife and just in general about a lady‚ was quite poor‚ I felt.

“My emotional response‚ you saw‚ was just [to] something that I don’t believe should have been said.

“And as I said‚ I will always stick up for my family. And in that case‚ my teammates as well.

“I’ve always felt that when it comes to family or racism comments or anything like that‚ that’s just a no-go zone.

"I’ve been called everything under the sun out on the field and that‚ quite frankly‚ doesn’t bother me.

“I’ve seen the footage and I regret the way it played out but for me it is how I am and I responded emotionally and regretted the way I played out.

"But I’ll always stick up for my family.”

By that logic‚ anything said to a player “out on the field” doesn’t constitute grounds for provocation and retaliation.

And that all bets are off if whatever is said is something that “I don’t believe should have been said”.

And that even though “I regret the way it played out” it’s all good because “I responded emotionally” and “I’ll always stick up for my family”. No matter what?

Warner accused De Kock of making his comment too quietly to be heard except by those close to him‚ and then denying that he had said anything: “At the end of the day we’re all men‚ and if you’re going to say something you look someone in the eye and say it.”

That’s from someone who didn’t “look [match referee Jeff Crowe] in the eye and say” what he had said because he declined a hearing where such details would have had to be disclosed.

Instead Warner accepted his level two charge of bringing the game into disrepute and was hit with a fine of 75% of his match fee and three demerit points.

De Kock‚ who was charged with the same offence on level one‚ did go to a hearing where he told Crowe what he had said to Warner. He was docked 25% of his match fee and earned demerit point.

Had Warner fronted up he might have been banned from playing in the second test at St George’s Park on Friday.

“What happened the other day was not appropriate and I responded a tad emotionally‚” Warner acknowledged.

But that was as far as his repentance stretched.

“I play with aggression on the field and I try not to cross that line and it has been in the past that I have sort of been fiery.

“But I don’t think whatsoever there on the field [at Kingsmead] that I have ever crossed that line.

"That’s how I play my cricket.

"I live by the sword and die by the sword‚ so I’ll keep playing with that energy and making sure I am the voice in the team to keep our guys motivated on the field‚ that’s for sure.”

Careful‚ Mr Warner‚ one more demerit point and the sword that’s hanging over your head will fall.