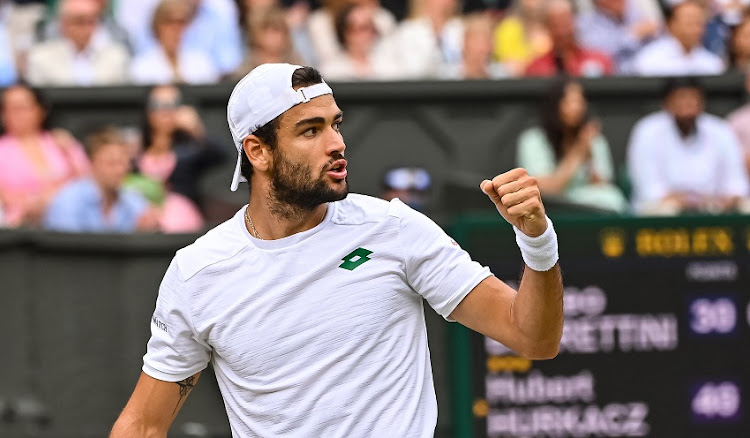 Mateo Berrettini of Italy celebrates during his match against Hubert Hurkacz of Poland in the gentlemen's semi-finals during Day Eleven of The Championships - Wimbledon 2021 at All England Lawn Tennis and Croquet Club on July 09, 2021 in London, England.
Image: TPN/Getty Images

Seventh seed Matteo Berrettini stayed solid in the face of a spirited fightback from Poland's Hubert Hurkacz to become the first Italian to reach the Wimbledon final on Friday with a 6-3 6-0 6-7(3) 6-4 victory.

The 25-year-old took two hours and 36 minutes to get past the 14th seeded Hurkacz on Centre Court to reach the championship match on Sunday - the same day Italy play in the Euro 2020 soccer final a few miles up the road at Wembley Stadium against England.

Waiting for Berrettini on the opposite side of the net will be either world number one Novak Djokovic, a five-time Wimbledon winner, or Canadian 10th seed Denis Shapovalov.

"I have no words," Berrettini said in his on-court interview. "I need, I think, couple of hours to understand what happened. I just know that I played a great match. I'm really happy. I'm really glad to be here.

"I think I never dreamed about this because it was too much for a dream."

Berrettini's success in the past fortnight has not been entirely out of the blue as he arrived at the All England Club after winning his fifth tour-level title at Queen's.

He was the first player to win the Wimbledon warm-up event on his debut appearance since Boris Becker in 1985 and remains on course to match the German's feat of completing the Queen's Club-Wimbledon double in the same year.