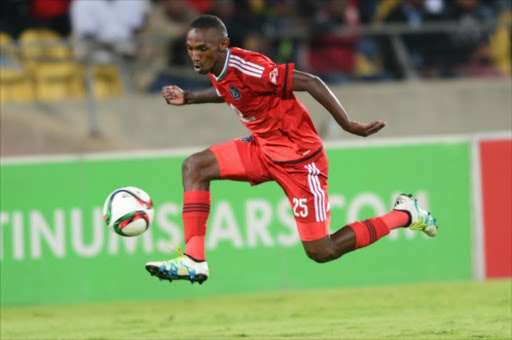 Orlando Pirates winger Thabo “Jomo” Rakhale will be fit to face Polokwane City when the Premier Soccer League resumes after the FIFA international break on October 15‚ the club announced on Tuesday.

The skilful Rakhale has watched the Buccaneers' last two games from the stands – the goalless draw and 1-1 stalemate against Cape Town City and Platinum Stars respectively – as Muhsin Ertugral’s men struggled to collect maximum points in front of their home fans.

The 25-year-old dribbling wizard‚ who started in the opening two matches of the League and the MTN8 quarterfinal‚ last played in Pirates’ 2-1 win away at Ajax Cape Town on September 20 when he was substituted after a hamstring injury and replaced by Patrick Phungwayo.

Ertugral deployed Riyaad Norodien on the wing in the goalless draw against Cape Town City and opted for Thembela Sikhakhane as winger in a 1-1 draw against visiting Platinum Stars.

“Rakhale suffered a hamstring strain but fortunately for the Ghost‚ [the club] can confirm that 'Jomo' is nearing full recovery and looks likely to be available for selection in the Absa Premiership match against his former employers Polokwane City‚” the club said in an injury update posted on their official website on Tuesday.

There is still a fitness doubts over midfielder Gift Motupa‚ who is also nursing a hamstring injury while centre back Gladwin Shitolo is yet to resume training.

“As for goalkeeper (Siyabonga) Mpontshane‚ he is still receiving treatment for a knee injury he suffered in the MDC (MultiChoice Diski Challenge) defeat to Maritzburg United last week‚" the club confirmed.

“Mpontshane is expected to be out for about a week. Meanwhile‚ Motupa continues to receive treatment on his injured hamstring and will most likely miss the upcoming league encounter.

“Nkosinathi Mthiyane is currently two weeks post injury. Rehabilitation has been ongoing. He has started light jogging with the biokineticist. An estimated two weeks before return to play is expected.” - TMG Digital