Maradona booted out while on holiday 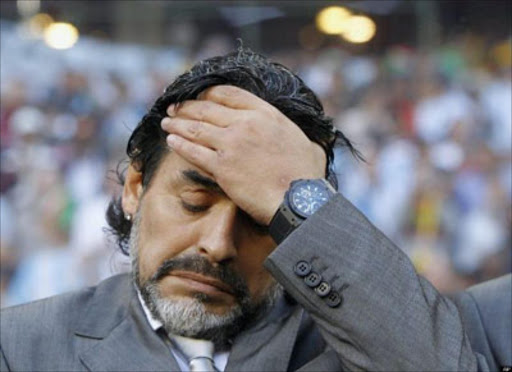 DUBAI - Diego Maradona was dismissed as manager of Dubai's Al Wasl football team in a surprise announcement made while the former Argentina captain and coach was on holiday at home, it was confirmed.

"The club has decided to dispense with the services of Maradona and the entire technical team, after only one season," a club official said.

The official, who requested anonymity, added that "the decision was taken at a meeting of the club board after a full study and assessment of a whole year that Maradona and his team spent in charge of the team".

The 51-year-old former playing great, who captained Argentina to the 1986 World Cup title and was national team coach from 2008 to 2010, learned of his sacking in Argentina, where he was spending his first annual holiday since being appointed by Al Wasl in May 2011.

In his last public statement before leaving Dubai for Argentina, Maradona said he was "determined to stay with Al Wasl until summer next year" when his two-year contract was due to expire.

The team's first, and as it turns out, only season under Maradona was disappointing, with no prizes coming the club's way.