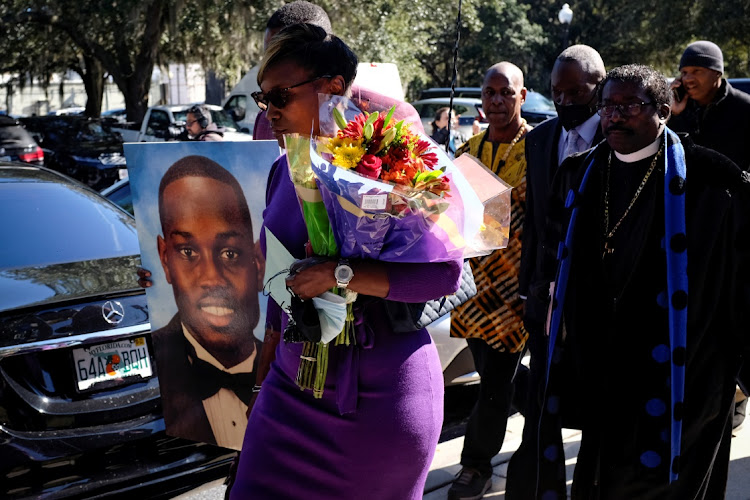 A Georgia jury deliberated for more than six hours on Tuesday without reaching a verdict on murder and other charges against three white men who chased and shot Ahmaud Arbery, a Black man who ran through their mostly white neighborhood.

Jurors are weighing evidence from the more than two dozen witnesses called since the panel was sworn in two weeks ago. These included Travis McMichael, the only defendant to take the witness stand, who said he fired his shotgun at Arbery in self defense.

McMichael, 35, his father Gregory McMichael, 65, and their neighbor William "Roddie" Bryan, 52, have pleaded not guilty to charges including murder, aggravated assault and false imprisonment for the killing in the coastal suburb of Satilla Shores on Feb. 23, 2020.

The jurors worked through lunch as they deliberated then asked to break for the night soon after 6 p.m. ET. The judge said they would resume on Wednesday at 8:30 a.m. ET.

Before deliberations began, Dunikoski asked jurors to find the defendants guilty of all charges and argued that the defense was seeking to blame the 25-year-old Arbery for his own death.

"Standard stuff: Malign the victim. It's the victim's fault," Dunikoski told the jury. "I know you're not going to buy into that. It's offensive."

Two white men on trial in the killing of Ahmaud Arbery were shown surveillance video of the Black man walking around a half-built house in their ...
News
2 weeks ago

Explaining the citizen's-arrest law at the heart of the defense, Walmsley told jurors that someone can make a citizen's arrest of a person only if a crime has occurred "in his presence or within his immediate knowledge."

The judge said such a warrantless arrest must occur "immediately after the perpetration of the offense or, in the case of felonies, during escape." Outside that timeframe, the citizen's "power to do so is extinguished," Walmsley said.

The defense has argued that the defendants had a right and a neighborly obligation to jump in their pickup trucks and chase Arbery to detain him because they had reason to believe he may have been connected to previous property crimes that had left the neighborhood on edge.

The law was repealed after Bryan's cellphone video of the shooting caused outrage. No evidence emerged that Arbery ever stole anything on his frequent runs through Satilla Shores, a leafy cluster of homes outside Brunswick. He was killed with nothing on him besides his jogging clothes and sneakers.

Dunikoski said the men simply did not have reasonable suspicion of a crime necessary to detain Arbery, and that Arbery had a constitutional right not to answer the questions the men shouted from their trucks.

"You can't hold somebody so the police can show up, and go, 'Well he must have done something,'" Dunikoski said.

Dunikoski read from Gregory McMichael's interviews with police in which he said he had no idea what Arbery had been doing before running past the McMichaels' driveway.

Outside the courthouse, Arbery's parents said they expected jurors to convict the defendants. "God has brought us this far and he's not going to fail us now," his mother, Wanda Cooper-Jones, told reporters.

The trial has underscored divisions among Americans over guns. A jury's acquittal in an unrelated case last week of a teenager who fatally shot two men during 2020 racial-justice protests in Wisconsin threw these differences into stark relief. In both trials, defendants claimed self-defense in fatal shootings.

A Georgia grand jury indicted a former district attorney on Thursday on two charges stemming from her delay in charging suspects captured on video ...
News
2 months ago

In closing arguments, Laura Hogue, the elder McMichael's lawyer, sought to paint Arbery as a frightening, disgusting criminal with "long dirty toenails." The comments upset Arbery's parents, who said they were gratuitously rude, and angered scores of Arbery supporters who have rallied beneath the grand oak trees outside the courthouse.

Travis McMichael testified last week that Arbery tried to fight him by grabbing his pump-action shotgun. McMichael said he was in fear of his life.

Prosecutors noted that he told the police on the afternoon of the shooting he could not say for sure whether Arbery actually grabbed his gun. Dunikoski told the jury that inconsistencies in his accounts and with video evidence showed he lied on the witness stand.

She said McMichael's pointing a shotgun at Arbery amounted to aggravated assault, and someone cannot claim self defense if they are committing a felony, nor can anyone use excessive force in their own defense.