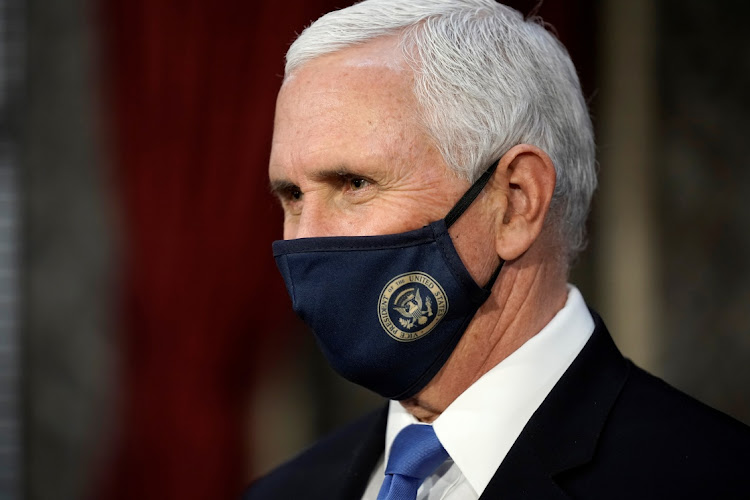 Trump's pressure campaign against his vice president took off at a campaign rally for Republican US Senate incumbents in Georgia on Monday night when he expressed hope that Pence would take action.
Image: J. Scott Applewhite/Pool via REUTERS

Despite pressure from US President Donald Trump to help overturn his election loss, Vice President Mike Pence will stick to his ceremonial duties and not block Wednesday's certification by Congress of President-elect Joe Biden’s victory, advisers said.

Trump ramped up pressure on Pence on Tuesday to block congressional certification of the November election results in an ongoing attempt to stay in power, after dozens of lawsuits by his campaign challenging the outcome failed in US courts.

The vice president, a loyal lieutenant during the four years of Trump's often chaotic presidency, has no plans to intervene and has told Trump he does not have the power to do so, even as he seeks to show support for the Republican president's quest.

Pence is set to preside over a joint session of Congress on Wednesday as it receives the results of the state-by-state Electoral College that determines the winner of presidential elections.

Biden, a Democrat, beat Trump 306-232 in the Electoral College and in the popular vote by more than 7 million ballots. Trump has declined to concede the election.

U.S. states have already certified the results, and Pence's role on Wednesday as president of the Senate is to "open all the certificates," in the presence of the House of Representatives and the Senate, the US Constitution says.

Trump suggested Pence could do more than that.

"The Vice President has the power to reject fraudulently chosen electors," Trump wrote in a tweet, his latest unfounded suggestion that the election was marred by widespread fraud.

Pence told Trump on Tuesday he did not believe he had the power to block the certification, according to a source familiar with the subject. The New York Times first reported the contents of the conversation.

In a statement released late on Tuesday, Trump denied the report.

Trump's statement and tweet put more pressure on Pence, whose future political prospects are tied largely to his ability to please the president's base of supporters.

But advisers said on Tuesday night that the vice president's thinking about his role had not changed.

Trump's pressure campaign against his vice president took off at a campaign rally for Republican US Senate incumbents in Georgia on Monday night when he expressed hope that Pence would take action.

"If he doesn't come through, I won't like him quite as much," Trump said.

About a dozen Republican senators, as well as dozens of Republicans in the House, plan to object to the certification of the Electoral College results in Congress on Wednesday. The move has virtually no chance of overturning Biden's victory.

Democrats and Republicans were locked in tight US Senate races in Georgia as final votes were counted in a showdown that will decide whether ...
News
1 year ago

'WILL UPHOLD THE CONSTITUTION'

"He will be very supportive of the president, but again he'll stick to the Constitution," one former White House official who has regular contact with Pence's team told Reuters.

The vice president would make clear that he backs Trump, while sticking to the constraints of the role, the former official said.

"It is a ceremonial role. It is opening up envelopes and reading the contents of it," he said. "That's it."

Pence's chief of staff, Marc Short, told Reuters on Monday that the vice president "will uphold the Constitution and follow the statutory law."

On Friday, a Trump-appointed judge rejected a lawsuit brought by Republican members of Congress asking Pence to reject Electoral College results, saying they had no standing for such a suit.

One Trump adviser said the president had told others he would like Pence to fight harder for him.

The vice president has sought, so far, to express his support without repeating the president's false claims about the election. On Monday, during his own trip to Georgia, Pence said that Republican objections to the election would be heard, but he did not commit to taking action on them.

"I share the concerns of millions of Americans about voting irregularities. And I promise you, come this Wednesday, we'll have our day in Congress. We’ll hear the objections. We'll hear the evidence," he said.

Following a pattern throughout their partnership, Pence has kept Trump informed about his thinking. The former adviser said Pence likely walked the president through the restrictions of his role, informed by a weekend meeting with a congressional parliamentarian.

US President Donald Trump pressured Georgia's top election official to “find” enough votes to overturn his defeat in the southern state, according to ...
News
1 year ago

Millions of Americans saw their jobless benefits expire on Saturday after Donald Trump refused to sign into law a $2.3 trillion pandemic aid and ...
News
1 year ago
Next Article