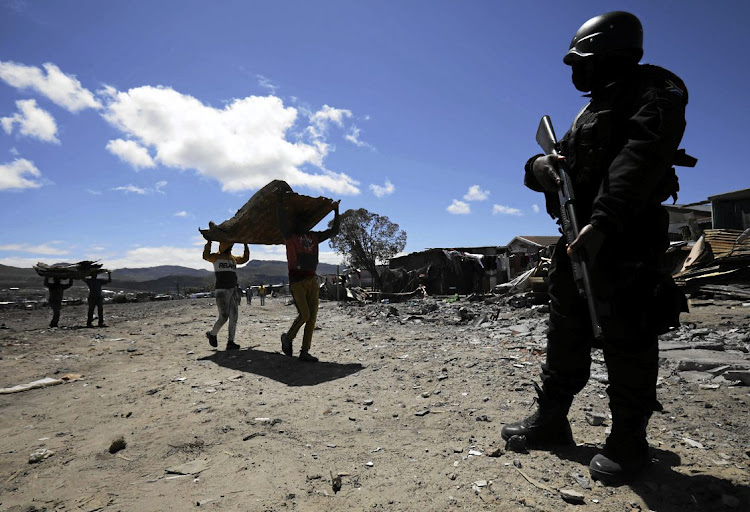 Under the eye of an armed guard, scrap metal merchants and residents of Masiphumelele in Cape Town collect scorched corrugated iron from the site of a devastating fire that destroyed more than 1,000 homes two weeks ago.
Image: Esa Alexander/Sunday Times

A fire-prone Cape Town shack settlement will be transformed into a model state housing development next to a sensitive wetland, the government confirmed on Wednesday.

This follows the devastating December 17 fire in Masiphumelele, near Kommetjie, which destroyed more than 1,000 shacks and left about 6,000 people homeless. The fire victims were forced to stay with friends and relatives over the New Year period, but will now get temporary accommodation until their new homes are complete.

The project is a collaboration between the City of Cape Town, the Western Cape provincial government and the national department of human settlements. It is being fast-tracked partly due to the added risk posed by the Covid-19 pandemic, with Cape Town nearing the peak of a second wave of infections.

About R32m has been allocated to build temporary structures and provide water and sanitation to affected residents, the government stakeholders said in a joint press release.

“Some residents will be accommodated on a nearby sports field, while others will be assisted on part of the affected fire site that has been cleared. Erection of the temporary structures will commence immediately,” the statement said.

The joy of the festive season and Christmas has been marred with sorrow for families of Newclare in Johannesburg after they lost everything when a ...
News
1 year ago

The government is also investigating the future use of new building technology to reduce the risk of fires. The move has the support of human settlements minister Lindiwe Sisulu and social development minister Lindiwe Zulu, who met on Tuesday to discuss housing policy.

“Fires have affected Masiphumelele and other informal settlements several times,” Zulu commented afterwards. “While we are busy with immediate relief efforts, we have to find a lasting solution that will see an end to fire disasters.

“It is not right that we keep going back to the same communities to try to deal with the same problem.”

The long-term plan for Masiphumelele involves an initial 420 housing units on the site of the recent fire, and a further 656 units on an alternative site. A buffer would also be erected to preserve an adjacent wetland.