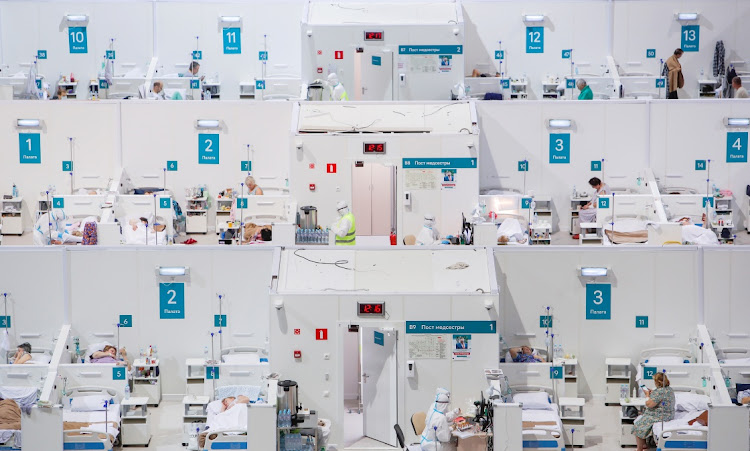 A general view of treatment blocks at a temporary hospital in the Krylatskoye Ice Palace, where patients suffering from the coronavirus disease (Covid-19) are treated, in Moscow, Russia November 13, 2020.
Image: REUTERS/Maxim Shemetov

Russia reported a record 22,778 new daily coronavirus cases on Monday as the authorities in Moscow turned to a temporary hospital built inside an ice rink to handle the influx of Covid-19 patients.

The country of about 145 million people has started opening temporary clinics and re-purposing hospitals in the capital and other cities to relieve the strain on its medical system.

In Moscow, the Krylatskoe Ice Palace, known for hosting international speed skating competitions, is now on the frontline after being converted into a temporary hospital for Covid-19 patients. It opened last month.

Though better resourced than other regions, authorities in Moscow are under severe pressure. They reported 6,360 new infections in the Russian capital on Monday.

"Only its design differentiates it from a regular hospital," Chief Doctor Andrei Shkoda told Reuters, wearing a medical mask and laboratory coat.

The facility, he said, is equipped with all necessary equipment to treat and diagnose the illness, including a CT scanner. It is currently treating about 600 people, with between 60 to 80 new patients being admitted and released every day.

"We prepared very well, which wasn't the case in the spring (at the start of the pandemic)," Shkoda said. "Since then, we have prepared clinical protocols, gained experience in the fight against the coronavirus..."

Despite a recent surge in cases, Russian authorities have resisted imposing lockdown restrictions across the country as they did earlier this year, stressing instead the importance of hygiene, social distancing and imposing targeted measures in certain regions. Authorities in the Siberian region of Buryatia, which borders Mongolia, on Monday closed restaurants, shopping malls, bars and public facilities for two weeks in a bid to stem the virus.

The region, which recorded 271 new cases in the last 24 hours, is the first in Russia to impose harsh restrictions in response to the pandemic's second wave.

"The number of patients is not decreasing," Alexei Tsydenov, the regional governor, said in a video address. "There is a shortage of medicine in the pharmacy network. More and more hospital beds are needed every day."

With 1,948,603 infections since the start of the pandemic, Russia has the fifth largest number of cases in the world behind the United States, India, Brazil and France.

Covid-19 cases linked to the "super-spreader" event at a Cape Town pub are steadily rising, and by Thursday there were almost 90 cases recorded and a ...
News
1 year ago

KZN health department closes most of its Covid-19 field hospitals

The KwaZulu-Natal health department has closed most of its temporary field hospitals that were erected to help permanent facilities cope with ...
News
1 year ago
Next Article