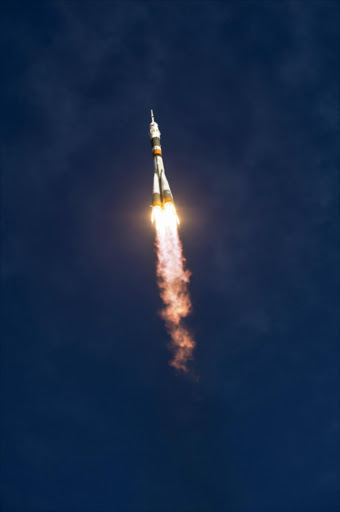 Leaving politics behind, a veteran Russian cosmonaut and a pair of rookie astronauts from the United States and Germany blasted off from the Baikonur Cosmodrome in Kazakhstan on Wednesday for a six-month mission aboard the International Space Station.

The crew's Russian Soyuz rocket lifted off at 3:57 p.m. EDT/1757 GMT and headed into orbit, a live broadcast on NASA Television showed.

"Adrenaline is rising, but feel relaxed," Gerst, 38, posted on Twitter as he and his crewmates rode a bus out to the launch pad.

The men were due to reach the station, a $100 billion research laboratory that flies about 260 miles (418 km) above Earth, about six hours later. The station, a project of 15 nations, is overseen by the United States and Russia.

Tensions between the countries have been strained, following Russia's annexation of Ukraine's Crimea peninsula and economic sanctions imposed by the United States as punishment. But until recently, the space partnership was largely exempt from the political rancor and the sanctions' financial impacts.

That ended earlier this month when Russian officials said they would not support a U.S. proposal to keep the station operating beyond 2020. Russia also imposed its own ban on selling Russian rocket motors for U.S. military launches, a more immediate concern since one of two primary rockets currently flying U.S. military missions use Russian-made engines.

At a prelaunch press conference on Tuesday, the new space station crew was asked if the escalating tensions were having any impact on their mission.

In response, Suraev, Reid and Gerst slapped their arms around each other and hugged.

Aboard the space station, currently staffed by NASA astronaut Steven Swanson and two Russian cosmonauts, it's business as usual, Swanson said during an inflight interview broadcast on NASA Television on Tuesday.

"We don't talk about it much, honestly," Swanson said. "It does not affect our working relationship. We get along very well. There are no issues at all up here."